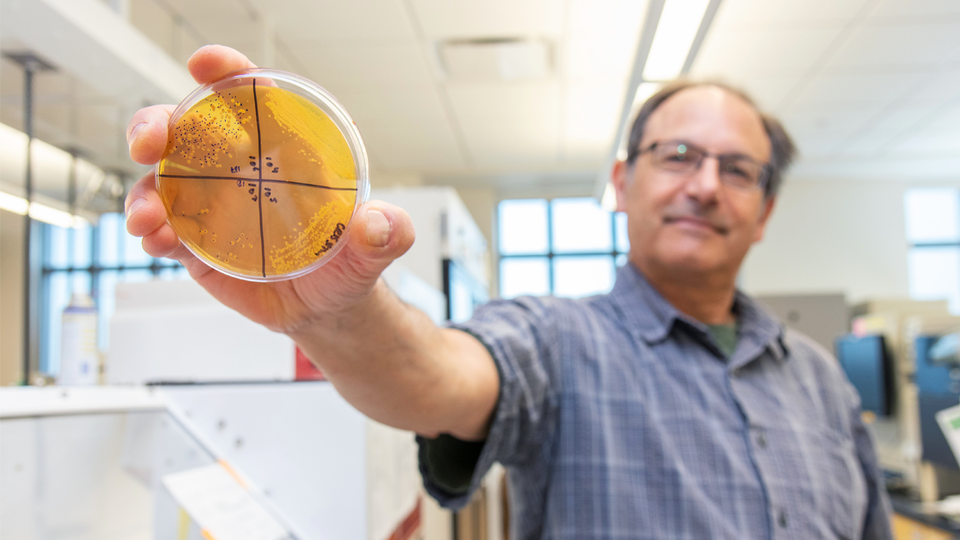 University of Nebraska-Lincoln researchers have developed a probiotic — sometimes referred to as beneficial bacteria — inside the competitive environment of the human gut, where it successfully competed against trillions of microorganisms.

Surviving these Darwinian origins likely gave the probiotic a performance boost, says a new study published in the journal Microbiome. The study’s authors include Nebraska’s Bob Hutkins and the University of Alberta’s Jens Walter, who conducted the study while an associate professor at Nebraska. It is the first clinical trial of the team’s probiotic strain, known as Bifidobacterium adolescentis IVS-1.

“We know many probiotics don’t survive; they don’t compete well; they don’t persist,” said Hutkins, Khem Shahani Professor of food science and technology. “The race goes to the swift, to the most efficient microorganism. Our probiotic strain won against the competition.”

The study also found that IVS-1 improved the body’s gut barrier function: a layer of beneficial bacteria lining the gastrointestinal tract. This barrier prevents harmful bacteria and toxins from leaking through, guarding against inflammation and potential health issues that include obesity, Type 2 diabetes and inflammatory bowel disease.

“These translational outcomes are important,” said Hutkins, a member of the Nebraska Food for Health Center. “We’re learning, in this study and others, that it is possible for probiotics to shift the (bacterial ecosystem) in a predictable way for the betterment of the host.”

Nebraska researchers discovered the IVS-1 strain while studying prebiotics: fiber-like carbohydrates intended to feed beneficial gut bacteria but not competing microbes. By feeding prebiotics to adults and analyzing DNA from their fecal samples, the team identified which healthy bacterium was most present in their gastrointestinal tract — the probiotic strain now known as IVS-1.

The team is now exploring opportunities to turn their probiotic into a consumer product. NUtech Ventures, the university’s commercialization affiliate, has patented the IVS-1 strain and licensed it to Viva 5 Corporation, a company dedicated to developing and manufacturing probiotic products.

“It’s important to have a commercial path to turn new research discoveries into a product,” Hutkins said. “Our ultimate goal is to develop dietary strategies for improving human health, and gut health products are a promising approach.”

The team’s clinical trial was funded by a grant from the USDA Agriculture and Food Research Initiative, and the Nebraska Research Initiative. Hutkins and Walter’s research team consisted of Janina Krumbeck, a doctoral alumnus of Nebraska; Heather Rasmussen, assistant professor of nutrition and health sciences at Nebraska; Jennifer Clark, professor of food science and technology at Nebraska; along with Krista Shawron and Ali Keshavarzian of Rush University Medical Center.