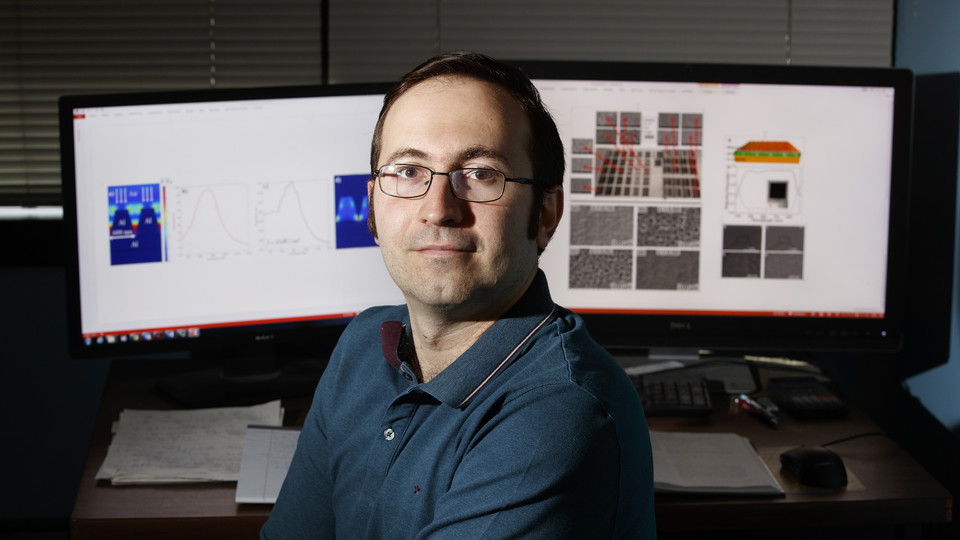 A U.S. Department of Defense award is helping Nebraska’s Christos Argyropoulos advance research into using ultrafast short-pulse lasers to create metal surfaces with properties that open the door to an array of national defense applications.

He is one of this year’s 25 nationwide awardees, selected from more than 260 applications. He is the first known Husker researcher to receive this honor since the program’s founding in 1985.

Using the award, Argyropoulos will develop a theoretical model to predict and optimize how a femtosecond laser’s settings — its power level and pulse type, for example — affect how the laser etches patterns onto a metal’s surface. These nanoscale patterns give the metal new properties that withstand the test of time and exposure to the elements, which is key to the nation’s defense efforts.

“The unique thing about the process is that it creates a permanent surface that works in very hot and very cold environments,” Argyropoulos said. “Typically, people have created coatings on metals, which degrade and become destroyed over time. This is a problem if the coated metal is out at sea.”

The method is called femtosecond laser surface processing. A femtosecond is a unit of time — one quadrillionth of a second — and in this context refers to the ultrashort pulse emitted from the laser and beamed at the metal material.

The process has the unique ability to create “black metals,” Argyropoulos said. Normally, when faced with beams of light, polished metal surfaces act like the silver side of a mirror, reflecting light photons back at the same angle at which they entered.

But in many cases, a metal would become more valuable without this reflective property. A metal-based drone, for example, adapted through the process could evade light detection systems if it absorbed, rather than reflected, the light aimed at it. A helicopter’s blades, or a ship’s cables, could de-ice themselves using the absorbed light as heat, a phenomenon called passive heating. The heat could even be converted to electricity and used to power Navy ships and drones, or could be reradiated back to the atmosphere for a cooling effect that requires no additional energy.

But it will be difficult to realize these applications without a method for modeling exactly how a laser will affect a metal under a given set of circumstances, Argyropoulos said. Though he and colleagues in Nebraska’s Center for Electro-Optics and Functionalized Surfaces are able to adapt a broad range of metal surfaces, they lack a system for predicting how factors like the laser’s energy, pulse length, wavelength and beam radius will affect the metal’s structure and usefulness.

“Without modeling, it’s all up to chance,” he said. “We need a way to know, ‘If you use this kind of power and this kind of pulse, you’re going to make XYZ.’ This will allow us to use this exciting technology in tens of thousands of scenarios.”

Running femtosecond laser surface processing experiments is costly and time-consuming, Argyropoulos said. But running a simulation on the computer is inexpensive and fast, and will enable researchers to develop the best design for a surface and optimize its properties. That’s why he’ll use his YIP funding to write the computer code needed to launch a model that scientists can use to compare theoretical results to what’s actually happening in the laboratory.

This modeling effort is the missing piece in Nebraska’s laser research enterprise, Argyropoulos said. Once in place, the Husker scientists will be better positioned to compete for additional funding from Army sources and even from the National Science Foundation, which has shown increasing interest in new technologies based on quantum mechanics. That field requires a precise understanding of how light interacts with matter at the nanoscale — a question to be addressed by Argyropoulos’ model.

For the project’s education component, Argyropoulos will hire graduate students to help him build the model and will connect them to internships at the U.S. Naval Research Laboratory in Washington, D.C., where he completed a fellowship in 2017. He will also use the model in the classroom.

Argyropoulos credits Nebraska’s strong infrastructure for laser research, and his affiliation with the NSF-funded Materials Research Science and Engineering Center, for helping him lay the groundwork for the YIP project. He said he’s excited that his new award will help the university continue to build momentum in laser science.

“There is so much expertise here that we’re in a tremendous position to increase our research trajectory,” Argyropoulos said. “We have a strong knowledge base, top-notch experimental facilities and soon we’ll have theoretical modeling abilities. We can put them together to be one of the best in the nation.”

The Office of Naval Research’s Young Investigator Program is one of the nation’s oldest and most selective basic research awards in science and technology. It supports the research and professional development of tenure-track academic researchers who have obtained a doctorate degree in the past seven years, and whose scientific pursuits have great potential to support the Department of Defense.