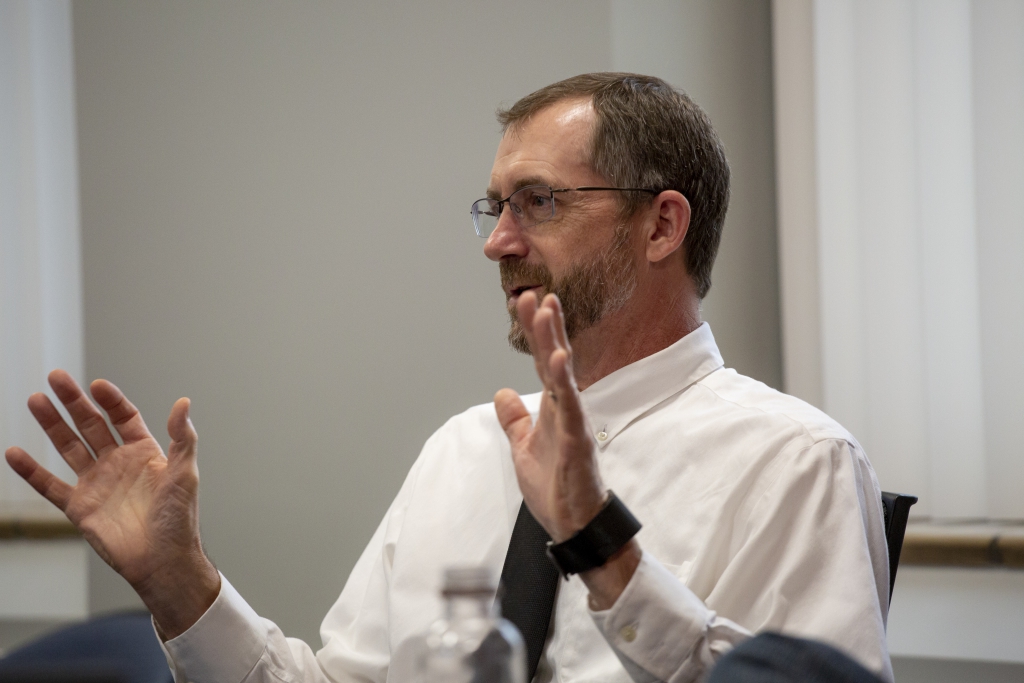 Rick Bevins, Chancellor’s Professor of psychology, has been named interim associate vice chancellor for research at the University of Nebraska-Lincoln, effective July 15.

Bevins, a faculty member at Nebraska since 1996, brings deep research and administrative experience to the role. He has conducted National Institutes of Health-funded research for nearly 25 years, played a major role in launching some of Nebraska’s high-profile interdisciplinary research efforts and led the Department of Psychology.

“As a department chair, principal investigator of an NIH-funded lab and director of a number of interdisciplinary initiatives over the years, I have most enjoyed supporting the talent and creative energies of the people I work with in a way that allows them to continually shape and achieve their goals,” Bevins said. “I will bring this passion to my new role and look forward to working with everyone to develop and implement strategies that allow us to meet and, should I dare say, even exceed the research and creative activity targets in the N2025 Strategic Plan.”

In the position, Bevins will lead research-related faculty development; plan strategic development of university research initiatives; create opportunities for faculty to network with funding agencies; collaborate with departments and colleges on research initiatives; and serve as institutional official for and oversee the Institutional Animal Care Program, among other roles.

Bevins’ research program focuses on behavioral pharmacology, drug abuse and addiction science. His work to pinpoint how learning processes and memory influence behavior has been critical to understanding the nature of drug abuse and the causes of relapse. He currently is PI or co-PI on four NIH grants that explore nicotine addiction and tobacco use, and in addition, collaborates with University of Nebraska Medical Center researchers to study the physiological effects of methamphetamine dependence and approaches to preventing relapse.

In May, Bevins was named director and PI of the Rural Drug Addiction Research Center, an NIH Center of Biomedical Research Excellence. He had served as co-PI since the 2019 inception of the center, which is dedicated to understanding the causes, impacts, challenges and harms of rural drug addiction. Prior to that, he was founding director of the Minority Health Disparities Initiative, established in 2012 to strengthen the infrastructure and network of researchers and practitioners addressing critical health disparities.

Bevins will step down from his role as department chair, a position he has held since 2012. He has been responsible for overseeing complex budgets and the work of nearly 40 faculty members who train approximately 100 graduate students. During his tenure, Bevins has strengthened the department’s research trajectory by doubling extramural grant and contract submissions between fiscal year 2014-15 and 2018-19; increasing federal expenditures from approximately $3.4 million in FY 2014-15 to $5.4 million in FY 2018-19; and hiring 17 faculty members to strengthen interdisciplinary collaboration and support student training.

“As a veteran faculty member, Rick will bring to this position valuable institutional knowledge, relationship-building experience and understanding of Nebraska’s research priorities and strengths,” said Bob Wilhelm, vice chancellor for research and economic development. “He also has a strong record of participating in and cultivating interdisciplinary research on campus. This expertise in bridging across disciplines is crucial as we work to meet the university’s N2025 research goals.”

Bevins succeeds Deb Hamernik, who is assuming a senior leadership role with the U.S. Department of Agriculture in Kansas City, Missouri.

Nelson assumes role as director of research strategy and infrastructure