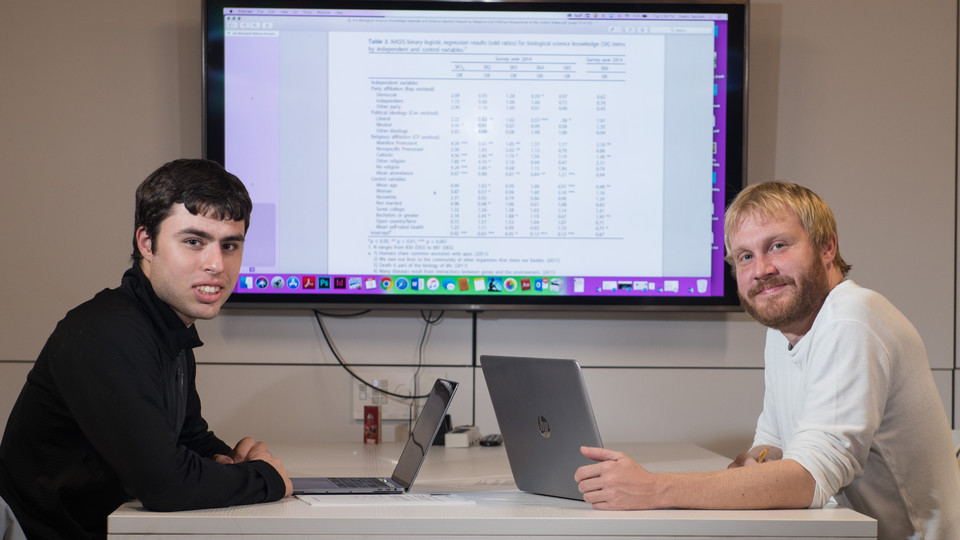 The public’s trust in, perception and understanding of science seems to be eroding, according to popular media and some recent studies, but little is known about what may be driving that change.

Sociology researchers at the University of Nebraska–Lincoln published research in the Sociological Quarterly that examined how science knowledge and curiosity are associated with both religious beliefs and political ideologies. They found neither religiosity nor political affiliation was related to overall scientific curiosity, but differences were found when looking at scientific knowledge.

Researchers culled data from 2011, 2014 and 2015 Nebraska Annual Social Indicators Surveys, which had asked questions relating to such topics as evolution, disease, microbes, vaccinations, science identity and scientific curiosity, among others.

Joseph Jochman, lead author of the paper and doctoral candidate in sociology, said the most salient effects of religious affiliation were found regarding scientific knowledge.

“In line with past studies, we found certain science knowledge questions have strong religious associations,” Jochman said. “People of conservative Protestant faiths tend to answer questions such as humans and apes share a common ancestor or death is a part of the biology of life with less accuracy than people who identify as mainline Protestant, Catholic or other religious faiths or no religion.”

On the flip side, conservatives were more likely to answer accurately that disease can result from interactions between genes and environment.

“The results show a very complicated picture, but that’s understandable because science is many different facets,” Jochman said. “As do religion or politics.”

Julia McQuillan, professor of sociology and co-author of the paper, said the results demonstrate that science has been politicized.

“Scientists hope that science is apolitical,” she said. “But we take in and code information based on our perspectives – including political ideology and religious beliefs.”

McQuillan said the communicating scientific knowledge to the public is increasingly important, but that this research demonstrates the need for scientists to be aware of predispositions and biases in the audiences with whom they are communicating.

“People do have these filters and if we want to share evidence-based information, we need to pay attention to those filters, often based in religion and politics,” she said.

The study was also authored by Alexis Swendener, a recent doctorate in sociology, and Luke Novack, a senior majoring in sociology and biology.