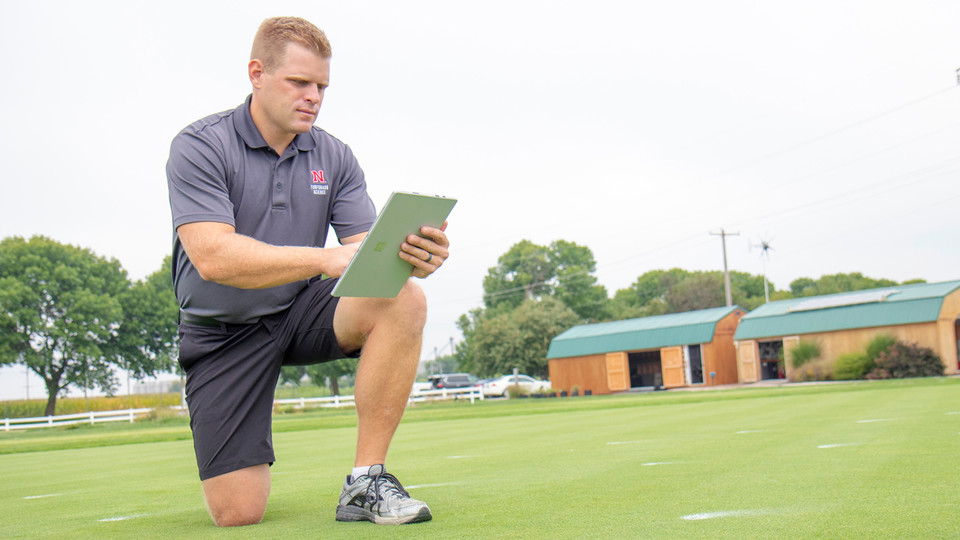 It’s the last thing on a golfer’s mind as they watch their ball glide toward the hole: the turf itself.

Maintaining that turf, however, requires spreadsheets and calendars — and often, guesswork — to determine when to apply fertilizer and other products.

Kreuser, assistant professor of agronomy and horticulture, has developed a software application that provides guidance for applying fertilizer and plant growth regulators: products that make grass grow slower. The app, GreenKeeper, is based on research models that use weather data to determine how long managers should wait before reapplying products.

“Our goal is to take all this research and put it into an interface that is intuitive, quick and easy to use,” said Kreuser, who is also a turfgrass specialist with Nebraska Extension. “We’re taking our research and turning it into a tool industry can use.”

The company has nearly 6,000 customers globally — with 1,000 weekly users — spread across six continents and almost all 50 U.S. states. Those customers include high-end golf, football and softball facilities that host major championships, as well as nine-hole golf courses in small communities, including several in Nebraska.

At the Lochland Country Club in Hastings, Nebraska, former golf course superintendent Craig Ferguson used the GreenKeeper app to simplify his job. During his 39-year career, he often struggled with the timing of turf product application — one of many responsibilities.

“Using the app, we were able to keep green speeds consistent, which is important for players, and apply products in a way that wasn’t detrimental to the health of the turf,” said Ferguson, now a research technician in agronomy and horticulture.

With GreenKeeper, Kreuser has a platform to help other turfgrass managers throughout the country — and the world — while also fulfilling his outreach priorities with Nebraska Extension.

“My vision for GreenKeeper is to transform how the turf industry makes daily decisions, and discover and share turf research,” Kreuser said. “And my Extension goals are to improve the precision and sustainability of turf management — only applying products when and where they’re needed. GreenKeeper is allowing me to fulfill both.”

Kreuser licensed the GreenKeeper technology from NUtech Ventures, the university’s nonprofit commercialization affiliate. He also worked with NUtech to develop a royalty structure that fit his growing startup company.

“NUtech has been supportive and flexible,” Kreuser said. “With apps and websites, many customers expect services to be free until you’re more established. The structure of our startup license is allowing us to reinvest money into developing our business and grow.”

“NUtech has your back as a new business owner,” he said. “They explain how to look at business decisions for the long term, which helps us make decisions that are right for our company and product.”

Kreuser also received the Emerging Innovator of the Year award at the Nov. 6 Innovator Celebration, hosted by NUtech Ventures as part of the Nebraska Fall Research Fair. The award recognizes junior faculty members for contributions toward commercializing a promising technology.