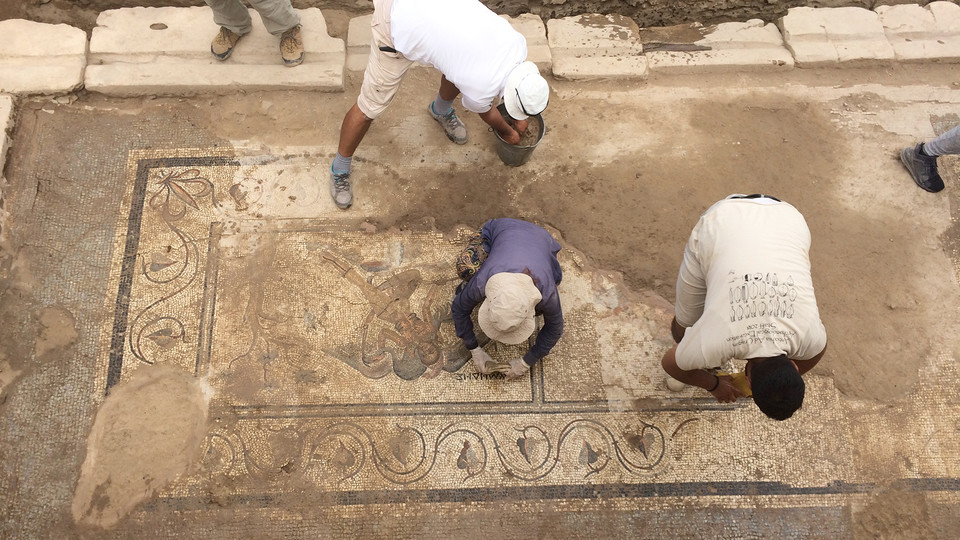 A rare, second-century figural floor mosaic has been unearthed in the ancient Roman city of Antiochia ad Cragum on the southern coast of Turkey.

The newly discovered mosaic features unusual composition and risqué subject matter – essentially ancient dirty jokes about the mythological characters Narcissus and Ganymede. The mosaics adorned the floor of a marble-lined public latrine that apparently served patrons of the adjacent Great Roman Bath Complex and those attending events at a nearby bouleterion, or council house.

Michael Hoff, a University of Nebraska-Lincoln art history professor who has led excavations at Antiochia since 2005, also reported that the 2018 excavation uncovered a hoard of more than 3,000 coins, dating to the early 17th century, which may have been treasure buried by Barbary Coast pirates at the site of an abandoned bath house near the ancient city; and a human skeleton, possibly a murder victim whose body had been dumped in the same bathhouse a thousand years earlier.

Forensic anthropologists Emily Hammerl of the University of Nebraska-Lincoln and Megan Moore of Eastern Michigan University, both working on site, examined the skeleton and concluded it belonged to a young man who died at a different location before his body was moved to the bathhouse.

Though it’s not rare to find a latrine in an ancient city, Hoff describes this find as “extraordinary.”

“When we excavate a city like this, we sometimes forget about the human factor – that this was a city of people, not just of things,” he said. “What we find is things, but this is really a reminder that there were real people involved in this story and they had a sense of humor. It’s a humanizing factor that made our find even more exciting.”

The mosaic was found in one of the earliest examples of latrines found in Anatolia, according to an expert in ancient mosaics.

“Of course, all of the ancient cities had latrines – but not all of them have been exposed or survived to the present day,” said Birol Can, an art historian from Uşak University in Turkey and a visiting research professor at the University of Nebraska-Lincoln.

Few with mosaic paving, found mostly in Italy, have survived from Roman days, Can said. Only two Italian examples feature human figures like those depicted in the Antiochia ad Cragum mosaics.

The latrine mosaics at Antiochia ad Cragum are particularly notable for their humorous, “not-suitable-for-work,” content. Two of three panels survive, each about 3 meters by 2 meters, both featuring bathroom humor versions of Greek myth. One panel features Narcissus, the boy who fell in love with his own beauty, and the other Ganymede, cupbearer to the gods. In the mosaic versions, Narcissus has fallen in love with part of his own anatomy and Ganymede is bearing the ancient version of toilet paper.

“The Antiochia ad Cragum latrine mosaics are a unique example of both the quality of workmanship and the highlighted topic,” Can said. “(They are) completely original in terms of narrative form, although they contain mythological figures.”

Mosaics were a laborious and expensive art, he said, and the customers who commissioned these works took into consideration both their own tastes and beliefs, as well as the appreciation of other viewers.

At some time in its history, part of the mosaic was damaged and repaired with plain stones, most likely to save on expense. It was damaged again, perhaps when the building’s walls were knocked down and its marble paneling salvaged to make mortar, Hoff noted. One panel is completely missing and a significant portion of the Narcissus panel is gone.

Antiochia ad Cragum was established about the time of Nero during the first century and flourished during the height of the Roman Empire. At its height, it may have been home to more than 6,000 people. By the time of the fourth century, the area was a key site for the development of Christianity. The city was abandoned by the time the Seljuk Turks defeated the Byzantine Empire in 1071.

The archaeological team excavating the site previously have uncovered several other mosaics, most notably a 1,600-square-foot geometric mosaic that surrounded a swimming pool outside the Great Roman Bath Complex. That work is believed to be the largest mosaic of its type in the region.

The Antiochia ad Cragum excavation is in partnership with Uşak University in Turkey, Clark University in Massachusetts, the Peter Kiewit Institute at the University of Nebraska and the Ministry of Culture and Tourism in Turkey. Students from St. Olaf College in Minnesota also regularly participate in the project.