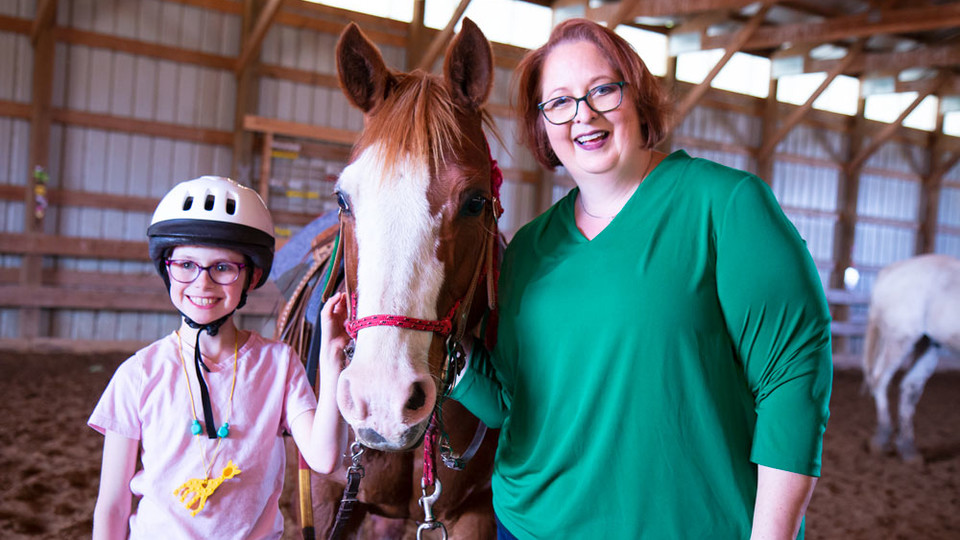 As 12-year-old Joe rides a horse named Indy, his mother watches from the far end of the arena. She smiles as her son interacts with the gentle, giant animal.

Michelle Howell Smith can relate. She has seen the positive effects of equine-assisted therapy on her own daughter, MaKenna, who has autism.

Howell Smith, research assistant professor at the Nebraska Center for Research on Children, Youth, Families and Schools, is exploring the effects of equine-assisted activities — a broad range of ground-based and horse-mounted activities — on children diagnosed with Attention Deficit/Hyperactivity Disorder, or ADHD. She is partnering with the Horses for Healing Equine Therapy and Research Center in Firth, as well as Norris School District, located just across the street from the riding center.

Howell Smith noted that equine-assisted activity has been shown to significantly decrease anger, depression, post-traumatic stress disorder symptoms and social anxiety among participants, as well as significantly increase hope, well-being and coping skills. By simultaneously targeting multiple systems — sensory, muscular, skeletal, limbic, vestibular and ocular — equine-assisted therapy fosters physical, psychological, social and educational benefits, both at the riding arena and away from it.

Although a handful of research studies exist that test different kinds of equine-assisted therapies and equine-facilitated learning, Howell Smith noted that such studies tend to have small sample sizes and “less-than-rigorous controls.”

“I knew I needed to do a fully-integrated, mixed-methods design that hadn’t been done,” she said.

Howell Smith’s pilot project is funded by a University of Nebraska Core Facility Grant and is housed at CYFS. It includes two children in middle school with ADHD. Study participants were recruited in late March, and the six riding sessions began in April.

At the beginning of the six-week program, participants’ levels of cortisol and alpha-amylase — stress hormones secreted through saliva — are examined. Because both hormones have natural rhythms of rising and falling throughout the day, a pattern is determined and compared to the riding days. Additionally, functional MRI scans are taken of the brain to learn whether neural connections during a resting state fluctuate from baseline to post-program.

Although the project includes a riding component, it involves more than just riding lessons. Participants also do ground-based work such as grooming the horse, learning how to put the tack on the animal and leading it through a simple obstacle course.

Each lesson and activity focuses on specific learning goals. For example, to help develop attention skills, items are placed throughout the arena for participants to notice and remember. There are physical activities, such as riding to a mailbox, leaning over to remove a package and delivering it somewhere in the arena, and sequencing activities such as riding through barrels, across a bridge and over to the mailbox.

“The arena has elements that look like playground equipment, but each one has a specific, therapeutic purpose,” Howell Smith said.

During riding sessions, participants wear heart rate monitors to record heart rate variability to measure overall health and stress response. Data are gathered to document how those patterns change over time, including general variations and in-the-moment changes while riding.

At the end of the six weeks, follow-up surveys and interviews are conducted.

“Intentionally triangulating all the different forms of data makes this project unique,” Howell Smith said. “Putting together physiological, survey and interview data generates rigorous, compelling evidence of what the program can do.”

Howell Smith’s motivation for the project stemmed from both her professional and personal life. She recently completed a separate project that included equine-assisted psychotherapy participants at St. Monica’s Behavioral Health Services, a Lincoln addiction recovery center. On a more personal level, her daughter has autism and an intellectual disability.

“We learned about equine-facilitated learning at a meeting for special education parents,” Howell Smith said. “Our daughter has always loved animals. At age 3, she wanted to be a veterinarian. My husband and I knew we had to sign her up. It turned a switch on in her.”

Before her daughter began riding, her play around other children was amid them, but “in her own world,” Howell Smith said. A few months after she started riding, however, she began to interact with friends at her brother’s baseball games.

“When you experience a truly dramatic change in your child’s behavior, it sparks ideas,” she said. “As a researcher, I realized there wasn’t a lot of solid, compelling evidence. But there was something about that stimulation and input my daughter got from riding the horse.”

The relaxation that comes from the interaction, Howell Smith said, is mutual between the children and the horse. The horse’s parasympathetic system — the part of the nervous system that conserves energy as it slows the heart rate and increases intestinal and gland activity — is projected out to the child, who then synchronizes with the animal.

“The horse is calm, and when you are grooming, riding and petting the horse, they help you slow down, too,” Howell Smith said.

Future research, she said, is limited only by imagination.

“You start with two children with ADHD, then move to 10 or 20, and then to participants with autism, multiple sclerosis or cerebral palsy,” Howell Smith said. “This can extend to virtually anyone — pre-teens, high school students or adults. The combinations of research designs are infinite.”

With expanded funding, plans include fitting the horses with heart rate monitors, too, to track the synchronicity between the animals and their riders.

“We are on step one of a 2,000-mile journey, but it’s an exciting journey to be taking,” Howell Smith said.