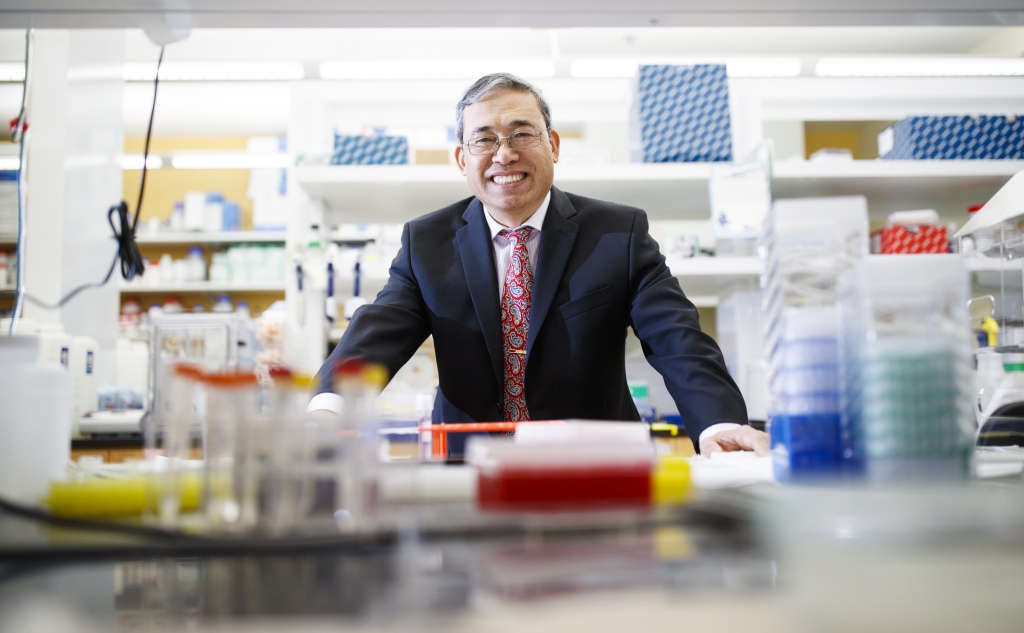 HIV is one of the body’s trickiest adversaries. By mutating each time it replicates, the virus outsmarts the immune system’s tried-and-true method for fighting an invader: producing antibodies that tag the virus for destruction and impede its replication. With HIV, the antibodies become outdated as the virus rapidly morphs, and the body can’t keep up.

But there is a small group of people whose immune systems can keep pace with HIV’s constant changes – without drugs. This may be because they’re able to quickly produce a rare class of “super antibodies” that latch onto HIV, blocking the surface where the virus attaches to host cells. Because this component of the virus doesn’t change as readily when HIV mutates, these broadly neutralizing antibodies, or bNAbs, succeed in combating HIV.

It’s this resilience to mutation that has Nebraska virologist Qingsheng Li and collaborators at the University of Maryland, Baltimore, and the Beth Israel Deaconess Medical Center eyeing bNAbs as key players in a new treatment for HIV. With a five-year, $3.9 million R01 grant from the National Institutes of Health, the interdisciplinary team is engineering multi-bNAb antibodies with the hope of creating a safer, easier method for fighting the virus. The University of Nebraska-Lincoln is receiving $1.5 million of the award.

“By putting multiple ‘blocking’ bNAbs together, we’re making an antibody that is even more potent than is currently available,” said Li, professor of biological sciences. “This significantly reduces the chances for the virus to escape through mutation.”

HIV remains a major public health problem, infecting nearly 37 million people globally and leading to 940,000 AIDS-related deaths worldwide in 2017, according to the Centers for Disease Control and Prevention. That’s despite the success of the gold standard of HIV treatment – antiretroviral therapy, or ART. It’s considered one of the greatest advances in the battle against AIDS, having decreased AIDS-related mortality by more than 80 percent in the developed world.

But it also requires a strict regimen of daily medication that comes with side effects and is associated with health problems like heart disease, kidney impairment and bone loss. And ART does not eradicate HIV, it merely suppresses it to undetectable levels. The virus continues to lurk throughout the body, ready to wake up and start mutating if the patient forgets to take medication, forgoes treatment or loses healthcare access.

Combined bNAb treatment has potential to overcome these challenges, Li said. Clinical studies from other research groups indicate that multi-bANb regimens have few side effects, the most significant being mild fatigue. And although bNAbs administered one at a time are not effective for very long, multi-bNAb treatments stay in the body longer than ART drugs. This means patients would require less frequent drug administration, perhaps every few months rather than every day.

The team is also engineering the antibodies to recruit CD8 cytolytic T cells, a type of white blood cell that kills damaged cells, to HIV-infected sites in the patient. By attracting these T cells to where they’re needed, the antibodies would help the body heal itself. This approach is a type of immunotherapy, an increasingly popular strategy that triggers a patient’s immune system to fight ailments like cancer, autoimmune disease and infectious disease.

Additionally, the researchers aim to strengthen the Fc, or fragment crystallizable, region of the antibody. This portion of the protein is key to eliminating infected cells from the body and lengthening the time the antibody is effective.

Ultimately, Li thinks this work may pave the way to a functional cure for HIV, meaning the patient is in a drug-free remission despite the virus’ latent presence. The research may even someday contribute to an eradication cure, achieved when all virus is removed from the body. And there is hope that bNAbs might be a key ingredient in an HIV vaccine down the road.

“We think we may resolve HIV’s major challenges,” Li said. “Drug-free remission is important because not only is current treatment costly and associated with side effects and other health problems, but because there’s a social stigma faced by the HIV-infected population.”

For now, though, the focus is on answering basic research questions about building multi-bNAb proteins. Li said regardless of whether the team’s treatment is ultimately viable, the work is an important building block in understanding immunotherapy’s potential.

“What we learn during this project can be applied to treatments for other diseases,” he said.

Li is a member of the Nebraska Center for Virology, established in 2000 as an NIH Center for Biomedical Research Excellence. It connects UNL scientists to partners at the University of Nebraska Medical Center and Creighton University who study leading viral threats to people, animals and plants.

NIH R01 grants are the agency’s original and oldest grant mechanism. They provide support for health-related research and development based on NIH’s mission.