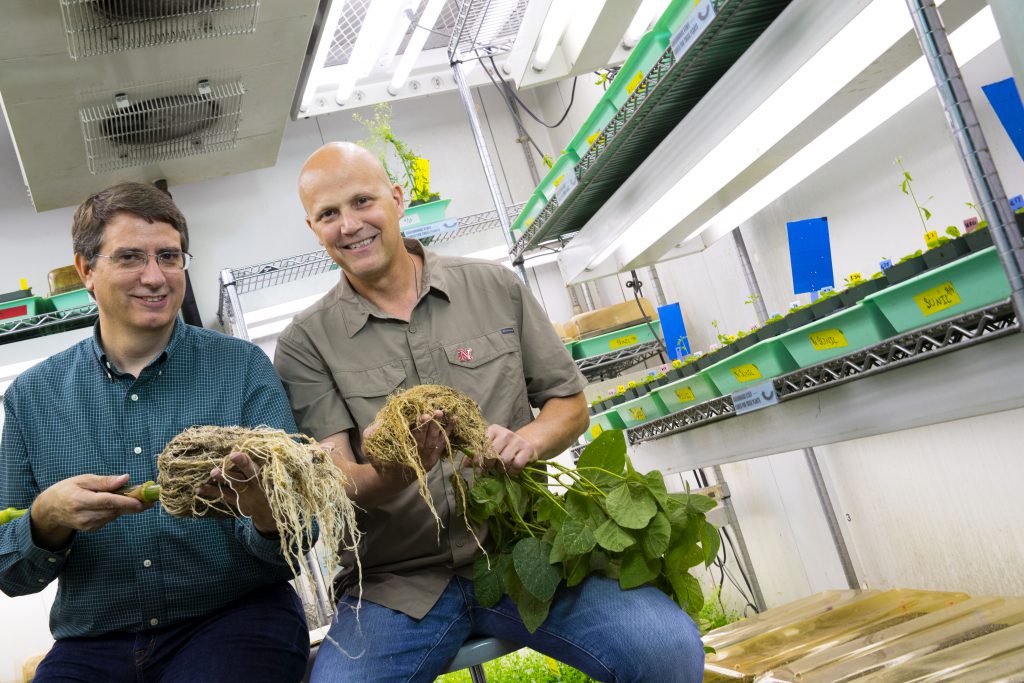 The University of Nebraska-Lincoln will lead a $20 million, Nebraska-based research effort to improve crop productivity.

Funded with a five-year award from the National Science Foundation’s Experimental Program to Stimulate Competitive Research, or EPSCoR, this new project draws upon a range of expertise in Nebraska. UNL is teaming with scientists at the University of Nebraska Medical Center, University of Nebraska-Kearney and Doane University on the new Center for Root and Rhizobiome Innovation.

The research uses a holistic strategy to study root and soil microbe interactions and to develop new biological tools to enhance crop performance. The award funds three new faculty positions, two at UNL and one at UNK, to fill critical research needs.

“This research is the new frontier for plant improvement. The root is an understudied plant organ and very important for productivity and for the ability to withstand abiotic stresses, like drought or soil salinity,” said project co-leader Edgar Cahoon, George W. Holmes professor of biochemistry and director of UNL’s Center for Plant Science Innovation. James Alfano, Charles Bessey professor of plant pathology, co-leads the project.

“Our soils and the crops they produce are invaluable resources for Nebraska and those around the globe who depend on our agriculture food and natural resource system,” UNL Chancellor Ronnie Green said. “Innovative, collaborative research like this is why Nebraska is at the leading edge of science aimed at increasing productivity and protecting critical resources.”

The team initially will focus on corn, but their findings and biological tools will be applicable to studying and improving other crops, including soybeans, he said.

Taking a systems approach, the researchers will investigate the genetic and metabolic diversity across a wide array of corn varieties. They seek to understand how root metabolism determines the chemical compounds that roots release into the soil and how those compounds affect soil microbes. They’ll also study how roots and microbes interact to influence corn health and productivity.

A key aim is developing new biological tools that will allow the researchers to use their findings to precisely modify plant genomes’, targeting specific traits such as drought resistance or yield.

The research harnesses technological advances that let scientists gather and characterize large collections of biological data. The ability to both quickly study crop diversity and introduce large numbers of genes into a plant’s genome will speed the rate of crop advancements, Cahoon said.

Using UNL’s extensive agricultural research facilities, the scientists will test and refine their enhanced crops in the greenhouse and the field.

“This award will also help train the next generation of young Nebraskans to pursue careers in STEM (science, technology, engineering and math fields) and contribute to the future economic development of Nebraska,” said Fred Choobineh, Nebraska EPSCoR director and Blackman/Lederer Distinguished Professor of electrical and computer engineering at UNL.

“Nebraska has had a reputation of being at the forefront of plant genetic improvement, and this will take us to the next level,” Cahoon said. “This project will have considerable benefit for agriculture. It’s strongly based in basic science, but it has real-life applicability for making sustainable crop improvements.”