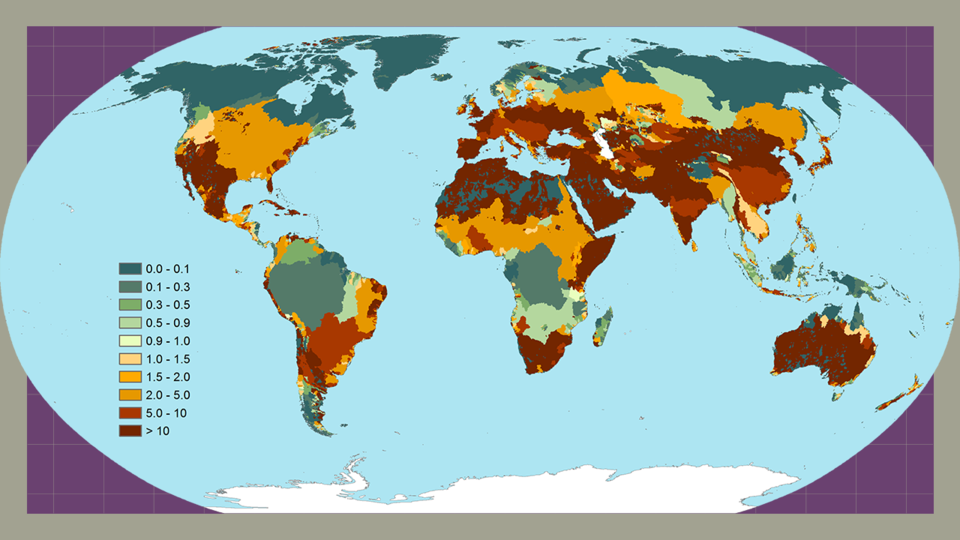 Human activity introduced ecosystem-threatening levels of phosphorus pollution to freshwater bodies around the world between 2002 and 2010, says new research led by the Water for Food Global Institute at the University of Nebraska.

Freshwater basins oversaturated with phosphorus covered nearly 40 percent of the world’s habitable land and supported almost 90 percent of the global population during that span, the study estimated.

Though essential to plant growth and a key trace element of many organisms, an overabundance of phosphorus in river basins can cultivate algae blooms in the freshwater gulfs and lakes that those rivers feed. The eventual decomposition of the algae consumes vast amounts of oxygen, creating so-called dead zones that choke out marine life. A dead zone the size of New Jersey occupies the Gulf of Mexico.

On a yearly basis, freshwater became the destination for an estimated 1.62 million U.S. tons of human-produced phosphorus – equivalent to roughly 13,000 blue whales or 62 Titanics.

The study found that the domestic sector produced 54 percent of the phosphorus, much of it in the form of untreated sewage containing human waste, detergents and other cleaning products. Agricultural sources – mostly mineral and manure fertilizers that boost crop yields but can erode or run off into river basins – contributed 38 percent. Industrial sources constituted the remaining 8 percent.

“This is a health issue and an ecosystem issue,” said study co-author Mesfin Mekonnen, postdoctoral researcher with the Water for Food Global Institute. “Identifying how much (phosphorus) humans are releasing into the freshwater system, and where it comes from, will help to address the issue.

“If you look at the maps, there are areas we need to pay close attention to. Those areas have to take into consideration how to control the pollution before it gets too extreme and starts to cause problems.”

Those maps show that 52 percent of the global phosphorus pollution originated in Asia, with another 19 percent coming from Europe and 12 percent from Latin America. North America and Africa each generated about 7 percent. China added the most phosphorus of any country, at 30 percent of the worldwide total. India and the United States followed with 8 and 7 percent, respectively.

Watering down the pollution?

To better evaluate how the estimated phosphorus pollution has affected freshwater ecosystems, Mekonnen and the University of Twente’s Arjen Hoekstra calculated the amount of freshwater needed to effectively dilute the phosphorus. The researchers then divided this number by the total amount of runoff within a river basin, providing a standardized measure of phosphorus pollution across global freshwater ecosystems. A result of less than 1 indicated that a river basin held enough water to dilute the phosphorus and nullify its ecological effects, whereas a quotient greater than 1 signaled that the basin took on more phosphorus than it could assimilate.

By this metric, the Aral drainage basin in central Asia endured the greatest pollution from 2002-2010, receiving 84 times more phosphorus than its threshold. Some of the world’s most arid and least phosphorus-laden regions, such as the deserts of Australia and Africa, still exhibited levels more than 10 times higher than its basins could accommodate. Of the 20 river basins studied, just three held enough water to dilute the phosphorus added by human activity from 2002-2010.

Phosphorus pollution in developing countries often stemmed from a lack of water treatment infrastructure, Mekonnen said. Unlike previous studies, the researchers attempted to account for three levels of water treatment – only the highest of which consistently removes phosphorus.

“In most developing countries, there is no water treatment,” Mekonnen said. “And when there is water treatment, they don’t focus on nutrients (such as phosphorus), because those are very costly to remove.”

The study also estimated the amounts of phosphorus added to and removed from soil while fertilizing, irrigating and harvesting 126 different types of crops. By those estimates, cereal crops accounted for 31 percent of phosphorus addition, followed by fruits, vegetables and oil crops, each of which contributed 15 percent. Mekonnen and Hoekstra reported that phosphorus pollution from agricultural fields increased by 27 percent between 2002 and 2010, mostly as a result of growers applying more mineral fertilizers.

Yet Mekonnen cautioned against blaming any one sector for the global rise in phosphorus pollution.

“This should not be a finger-pointing exercise,” he said. “But it’s indicating that there is a problem, and we have to focus and try to address it.”

Mekonnen and Hoekstra reported their findings in the journal Water Resources Research.