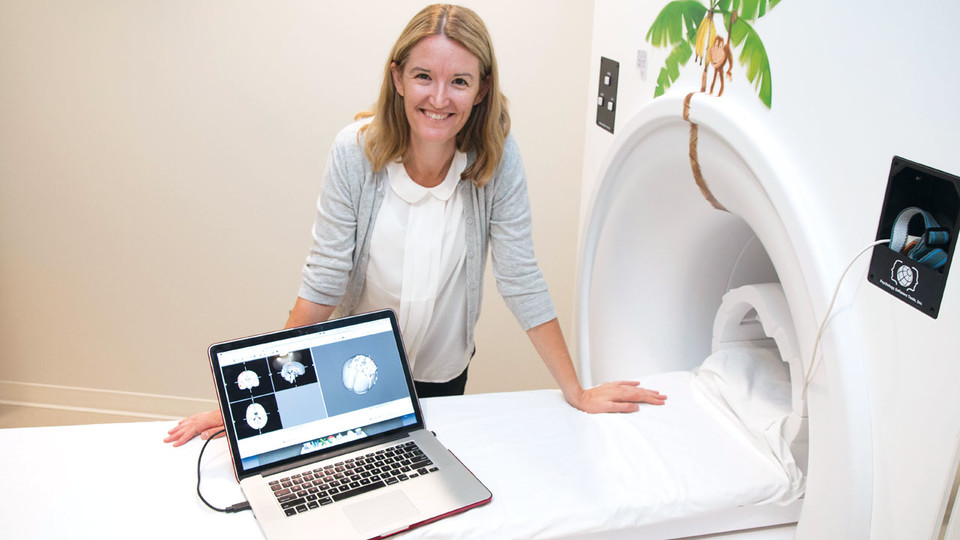 What is 72 multiplied by 12? While fourth-graders will focus on arriving at the correct answer, University of Nebraska-Lincoln researcher Carrie Clark wants to know what happens in the brain as they learn to solve the problem.

Clark, assistant professor of educational psychology, is using functional MRI technology to capture brain activity while children learn mathematics. Housed at the Nebraska Center for Children, Youth, Families and Schools, the project is exploring the relationship between children’s mathematics learning and executive function – the ability to maintain focus and behave in a goal-oriented way.

It is a new application of fMRI technology in the relatively new field of educational neuroscience.

“We’ve used fMRI research to understand what areas of the brain are involved in particular mathematics functions, but I’m really interested in using fMRI to capture the dynamic process of learning, and saying, ‘This is what happens as a child learns new things,’” said Clark, a CYFS research affiliate. “I’m excited to push the boundaries.”

To understand the learning process, Clark developed a mathematics task for children ages 8-10. She invited children to learn how to count the way computers count, using binary numbers, in the MRI scanner, which highlights changes in oxygenated blood flow to different parts of the brain. The scan identified which parts of the brain may be involved in mathematics learning.

The children who actually learned the binary number concept showed different brain activity, Clark said. Those who understood the concept showed increased activity in the left inferior prefrontal cortex, an important region of the brain for integrating concepts and modulating attention to better focus on something.

“We think what’s happening is that kids who are learning more effectively are good at knowing when to deploy those cognitive resources to learn,” said Clark, who received funding from the Office of Research and Economic Development.

Researchers also found that the children who learned the binary number concept showed more cross-talk among areas of the brain linked to executive function.

Changes across the learning cycle were also identified. As the children learned, they initially showed more activity in the prefrontal cortex when they watched videos about familiar decimal numbers. But by the end of the task, Clark said, that activity had gone away and was present only for the new binary concept.

“So they were really using those cognitive resources to learn about this new concept,” she said.

Clark hopes eventually to have children who are struggling to learn math perform the same tasks in an MRI scanner to better understand their brain activity during the learning process. Such research may help researchers determine how to manipulate tasks to generate the same type of neural activity as children who are learning effectively, which could provide an invaluable tool for educators seeking to tailor teaching strategies.

Children sometimes fall out of the mathematics curriculum, Clark said, partly because mathematics is so hierarchical – a firm grasp of one concept is needed to move on and effectively learn the next concept.

“When kids don’t learn those next concepts, they’re restricted in terms of the opportunities they can pursue,” Clark said. “My goal is to understand how children learn effectively so we can develop mathematics curricula to help all children succeed.”

Project explores how visually impaired children are taught to write