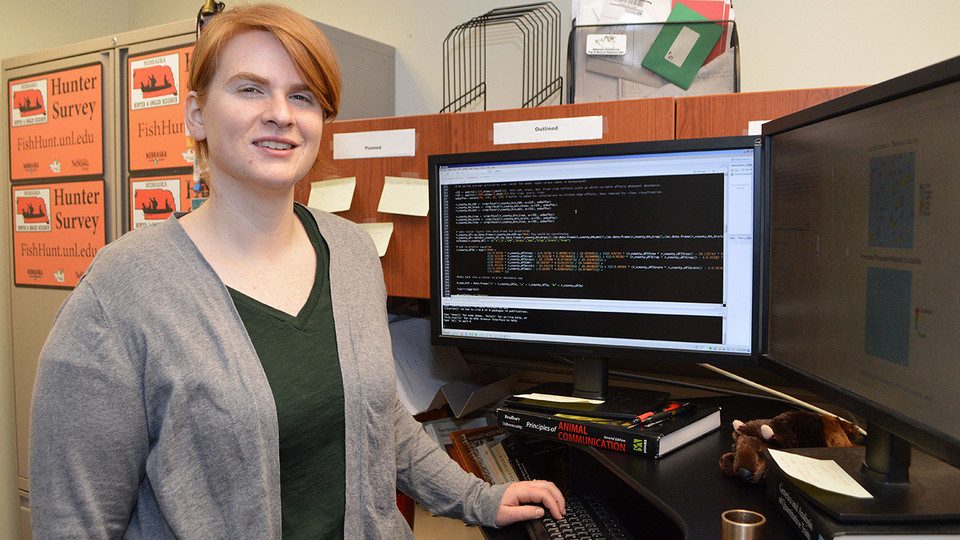 A new web-based application from the University of Nebraska-Lincoln will allow the state’s wildlife managers to examine how virtually manipulating land cover in a region could affect pheasant populations — and how much such efforts might cost.

Though the Pheasant Habitat Simulator was created to help the Nebraska Game and Parks Commission bridge the gap between game-bird habitat research and land management for the species, Lyndsie Wszola and her colleagues built it as an open-source app.

As long as researchers know the relationship between their question of interest and land cover, they can replace the pertinent bits of code to create a new web application suited to their needs — examining links between cropping practices and nitrates, for example, or the emerald ash borer and its spread among urban trees.

“This is not just a pheasant app,” said Wszola, research associate with the Nebraska Cooperative Fish and Wildlife Research Unit in the School of Natural Resources at Nebraska. “It is a framework. Because it’s open-source, we’re interested in seeing people use it in new ways. We want to see how it grows and progresses.”

The application came out of a request by the Nebraska Game and Parks Commission to create an easy-to-use, localized and efficient tool to help manage pheasants. Scientists with the cooperative had previously provided the commission with a thematic Nebraska map showing the state on a color gradient: red for areas with better pheasant habitat and blue for areas with poorer habitat. The map was instrumental in the development of the Berggren Plan for Pheasants and was used to predict what might happen to pheasants under future land-cover scenarios.

“But if the scenario doesn’t fit what actually occurs, it’s not useful,” said T.J. Fontaine, assistant unit leader with the cooperativce. “A static map, the minute it’s made, is always out of date. What the world wants is to answer, ‘What can I do today to affect the (wildlife) population where I am?'”

The Pheasant Habitat Simulator shows each Nebraska county as a pixelated grid, representing six land-cover types and accounting for how suitable the land cover is to pheasant populations. Users can manipulate the ratio among them — increasing wetland, for example, while decreasing pasture or cropland. In the background, the app uses a statistical model of pheasant-habitat relationships in Nebraska to translate the change in land cover to that of pheasant suitability. On the user side, a visual representation of their decisions’ consequences is displayed. A second tab shows the estimated costs of those actions, which are tied to average land-use values based on county-level data.

Traditionally, building this type of app would cost an organization thousands of dollars, rendering it unaffordable for many organizations, Fontaine said. But manipulating the open-source application requires only time and ingenuity.

“We can move science forward faster if we close the gap in communication between researchers and users,” he said. “We believe this (product) makes the gap narrower. It helps researchers communicate information outside the walls of academia to those who actually use it.”

“Decision-support apps, such as Lyndsie and T.J.’s, are incredibly useful in synthesizing and illustrating complex models in a way that clearly shows the trade-offs in alternative management approaches,” he said. “With the development of more open-source tools, I think that these types of apps will become a greater tool in science communication.”

The app was designed using Shiny, a software package for the open-source statistical programming language R, and it will be updated based on user feedback “as long as the tool is useful,” Wszola said.

Wszola and Fontaine authored a recent study on the app alongside graduate students and professional researchers from the School of Natural Resources, state and federal natural resource agencies, nonprofit organizations and the private sector.