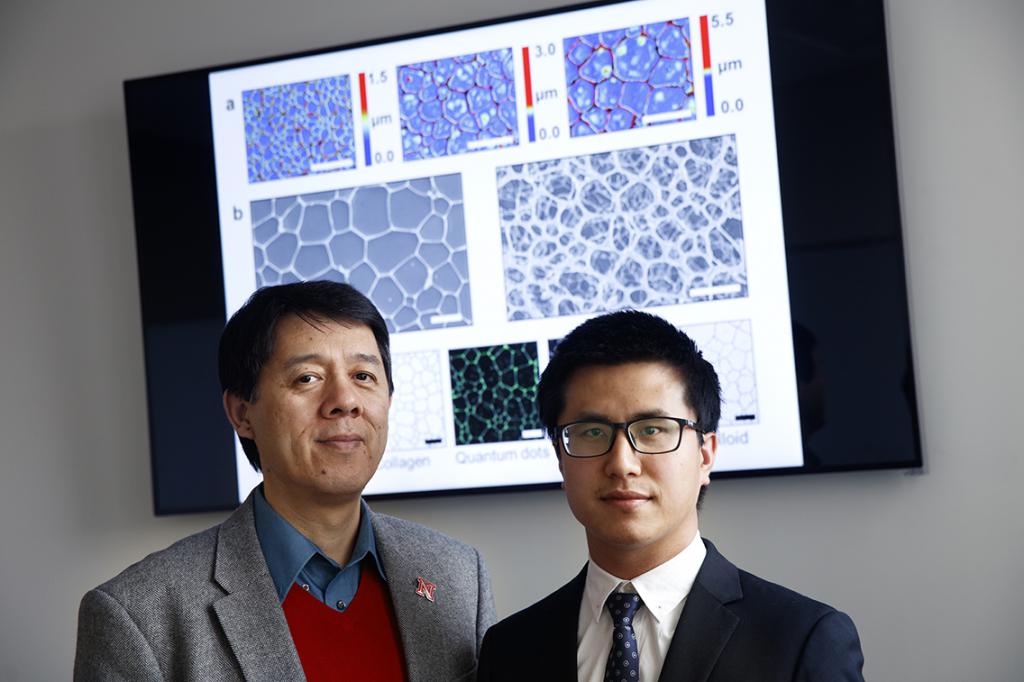 Discovering a way to technologically harness ice recrystallization could enable fabrication of highly efficient materials for a range of products, including porous electrodes for batteries and transparent conducting films used to manufacture touch screens and wearable electronics.

A team of researchers from the University of Nebraska-Lincoln and the Chinese Academy of Sciences published its findings on ice recrystallization in the May 2 issue of Nature Communications.

Ice recrystallization is a ubiquitious process in nature. It involves growing large ice crystals at the expense of small ones, leading to an increase in the average crystal size and a decrease in the total number of crystals. The process affects everything from the survival of living organisms in subzero environments and food storage to the flow of glaciers and decreases of atmospheric ozone.

CAS, one of the world’s top research institutions, teamed with Nebraska chemists on the project. Together, they learned that ions, which are electrically charged molecules, can be used to fabricate new two- and three-dimensional structures on a wide range of other host materials. These technologically important host materials include sodium bromide collagen, quantum dots, and silver and polystyrene colloids that are suitiable for organic electronics, catalysis and bioengineering.

“The pore size of two-dimensional and three-dimensional porous materials produced with our method can be easily adjusted, which is critical for practical applications,” said project leader Jianjun Wang, a professor in the Institute of Chemistry at the Chinese Academy of Sciences.

Wang’s anti-icing experimental research group collaborated closely with Xiao Cheng Zeng, Chancellor’s University Professor of Chemistry, and Nebraska materials researchers who investigate the properties of water and ice from a computational perspective. As a result, Wang’s group is now using recrystallized ice as a template for synthesizing two- and three-dimensional materials with different pore sizes.

“The experimental-theoretical team allows us to work out the problem beautifully because whenever we predict something, they can test it,” Zeng said. “Then they can feed back some of the new experimental data, allowing us to reconsider our modelling approach.”

The teams further complement each other because the Nebraska researchers work from the atomic level up. The experimental group at CAS, meanwhile, works down from the macroscopic to the molecular level to understand and control ice formation. Wang said this top-down approach is essential for applications such as anti-icing coatings, cryopreservation of cells and tissues and developing templates for making porous materials.

His ion-specific recrystallization research stems from his group’s cell cryopreservation project. A key reason for cell death during cryoperservation is because large ice crystals grow at the expense of small ones during recrystallization.

During an experiment, one of Wang’s students uncovered a striking effect by chance. Adding sodium chloride or phosphate buffer saline produced a profound but previously unresearched effect on the size of recrystallized ice.

In further experiments, Wang’s team rapidly froze pure water and three saline solutions, then allowed them to cool at higher temperatures. They found that ions of sodium fluorine produced the smallest ice crystals. Sodium bromine produced larger crystals. Those with sodium iodine produced the largest crystals, which outsized even those produced from pure water.

Other than their size, the crystals have similar properties because all were produced using ions from the same chemical group, the halides. Despite their similarities, the new results show clear evidence that different ions can significantly affect ice recrystalization to varying degrees.

The researchers found that they could tune ice-grain size from approximately 27 microns – roughly half the size of a human hair – to 277 microns.