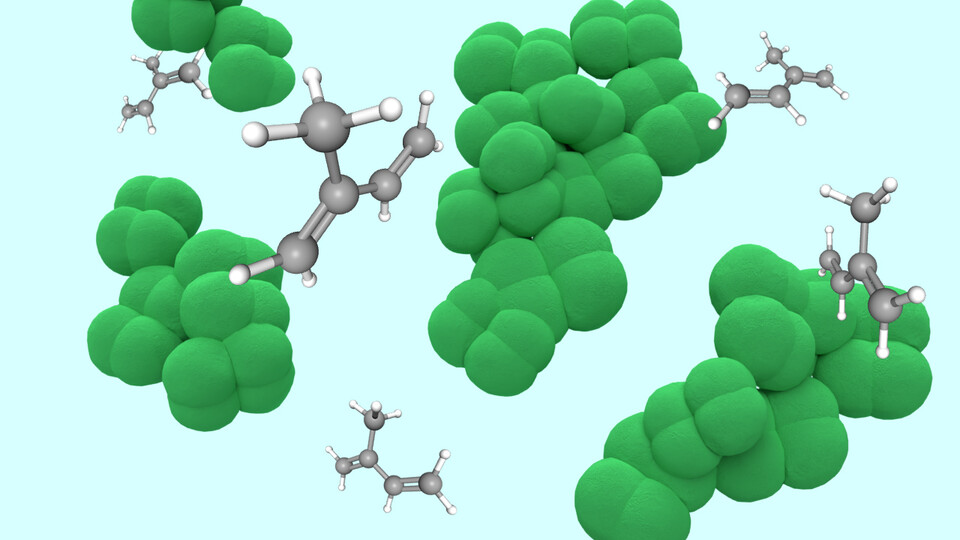 A rendering of methane-producing microorganisms and molecules of isoprene, the primary chemical component of synthetic rubber. A strain engineered by Nebraska's Nicole Buan and colleagues has yielded isoprene levels that outpace those of yeast, E. coli and other microorganisms engineered for the same purpose. Scott Schrage/University Communication

The single-celled microorganisms known as methanogens are, no surprise, known for emitting methane: in the guts of humans and other animals, in hydrothermal vents that gash the ocean floor — almost anywhere, really, that oxygen is not.

But biochemist Nicole Buan and colleagues at the University of Nebraska–Lincoln have now genetically engineered a species of methanogen that can also yield sizable amounts of isoprene, the primary chemical component of synthetic rubber. Promisingly, that isoprene production substantially outpaces the yields of other microorganisms engineered for the same purpose.

“It’s the equivalent of if you or I just started breathing rubber,” said Sean Carr, a doctoral advisee of Buan’s. “That’s essentially what we made this organism do.”

Roughly 800,000 tons of isoprene, most of which go to the production of synthetic rubber, are refined from petroleum annually. A climate-conscious desire to reduce reliance on the fossil fuel has pushed researchers to seek alternative, renewable sources of the chemical. Among those alternatives are other types of single-celled microorganisms, including the more familiar yeast, the E. coli bacterium, and blue-green algae known as cyanobacteria.

As organisms, though, those sources require feedstocks to yield isoprene. Many of the feedstocks, especially glucose, are themselves expensive to produce or process on a large scale. Some of them come from corn, sugar beets or other crops that could otherwise be feeding people or livestock. And extracting whatever isoprene is produced can also mean designing and constructing new infrastructure, another pricey and labor-intensive proposition.

Which is partly why Buan had taken an interest in methanogens, which need no light, want no oxygen and readily devour otherwise worthless waste products — including wastewater, which they also happen to treat in the process.

“They’re really incredible, really magical organisms,” said Buan, associate professor of biochemistry. “They can grow in a sealed glass vessel with just some minerals, and that’s it. To me, they had the highest potential for developing sustainable technologies that could really revolutionize our climate and energy needs.”

Another reason for her interest? Methanogens naturally direct about 5% of their metabolism to building cellular membranes from isoprenoids — chemical compounds whose fundamental component is isoprene. For years, Buan and her students have been thinking about ways to pluck at least some isoprenoids from the methanogens before they could incorporate all of it into their membranes.

“‘This would be amazing if it worked, but there’s no way it’s going to work,’” was a common refrain Buan recalled hearing. “The thinking at the time was that if you take carbon and energy away from making cell membranes, well, how are they going to divide and grow?”

As soon as she secured funding, though, Buan and her team set out to put those doubts to rest. They started with the methanogen species Methanosarcina acetivorans and the gene of a poplar tree that can convert up to 10% of its carbon into isoprene. That gene instructs the building of an enzyme, isoprene synthase, that acts on a chemical compound called dimethylallyl pyrophosphate, or DMAPP. The compound, which consists of an isoprene molecule and a pyrophosphate molecule, normally becomes part of a methanogen’s cell membrane. Before that can happen, the isoprene synthase intervenes by chopping off the pyrophosphate, leaving the tiny isoprene molecule free to escape through the membrane in the volatile form of a gas.

If yeast and bacteria were any indication, transplanting a modified version of that gene from the poplar to M. acetivorans would allow the methanogen to produce the isoprene synthase and, by extension, the isoprene itself. Buan, Carr and their colleagues encased the poplar gene in a painstakingly crafted DNA molecule, a plasmid, that was taken up by the M. acetivorans chromosome. Then they fed the methanogen some of its favorite junk foods: carbon dioxide, acetate, methane, methanol.

When feasting on methanol, M. acetivorans converted 4% of its carbon into respired isoprene, resulting in a yield 179 times higher than a best-in-class bacterium managed to produce when being force-fed glucose.

As for whether the methanogen could survive and grow without its standard supply of DMAPP? The team found that the population of engineered M. acetivorans doubled at the same rate, while producing the same amount of methane, as it otherwise did.

In fact, the overall biomass of the methanogen actually increased when it was breathing the isoprene. To compensate, the engineered methanogen essentially rewires its gene expression and metabolism into a different energy pathway that supports growth, the researchers said. In that way, the M. acetivorans strain is growing not in spite of producing the isoprene, but in part because of it.

“What it shows is that they actually benefited by making this high-value chemical, and that’s because of the specialties of methanogen metabolism and physiology,” Buan said. “We’ve been calling this an isoprenogen, because it’s really a new type of organism. As far as we know, there’s no other organism that grows by producing isoprene gas.

“It’s not a stress response. It’s not an overflow valve. This is actually how it’s growing.”

Given the number of existing wastewater treatment plants and other biofuel facilities already incorporating methanogens, adapting them to also recoup isoprene could be relatively straightforward, the researchers said. In the meantime, Buan’s lab is looking at how it might optimize M. acetivorans to convert even more carbon into isoprene.

As of now, she said, there might be “only a handful of labs around the world” with the biochemical and genetic expertise needed to fine-tune methanogens in similar ways. But recent outcomes are showing that the work is worth it.

“There are not a lot of people who can engineer methanogens,” Buan said, “but if you know how, it actually works really well. And it’s cheaper.”

The team reported its findings in the journal Applied and Environmental Microbiology. Buan and Carr authored the study with Nebraska’s Karrie Weber, associate professor of Earth and atmospheric sciences and of biological sciences, and Jared Aldridge, a doctoral alumnus of Nebraska.

The researchers received support in part from the Water Environment and Research Foundation and the Nebraska Center for Energy Sciences.SHARE