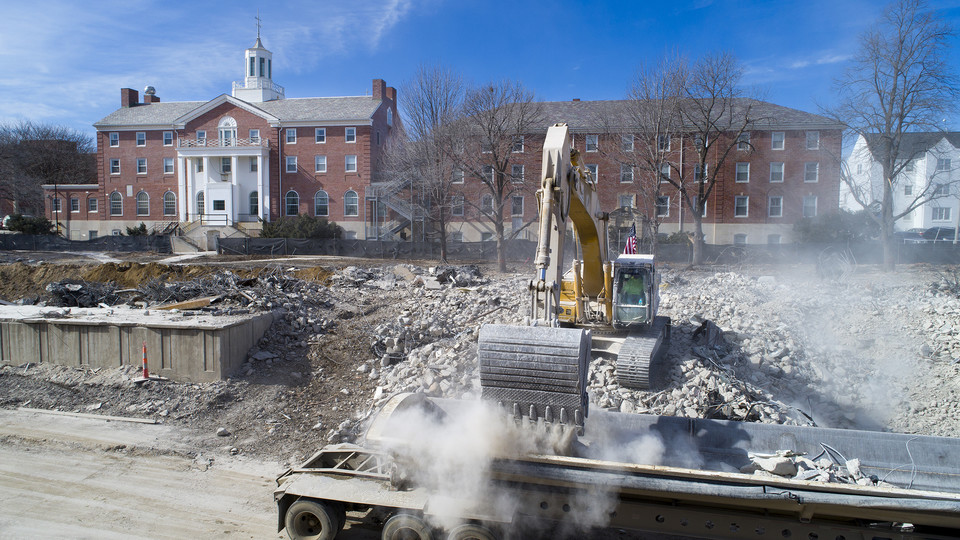 A data sample of just 20 seconds is helping Nebraska’s Christine Wittich start her research career with a bang.

An assistant professor of civil engineering, Wittich is a part of the University of Nebraska-Lincoln research team studying the December 2017 implosion of Cather and Pound residence halls. Building on her research focus into earthquake engineering, Wittich is studying how seismic activity generated by explosives and the tumbling towers affected surrounding structures.

“The goal in this project is to help us better understand how the response of one building during an extreme event can impact surrounding structures,” Wittich said. “This particular data set is important because it can be applied to a wide variety of situations, from a vehicular impact or explosion to earthquakes and severe wind events.”

While other members of the research team were studying how the buildings fell, Wittich used 21 accelerometers to measure seismic activity generated by the controlled implosion. The sensors were placed on the ground around the site and within three nearby University Housing buildings – Neihardt and Abel residence halls and the new Willa Cather Dining Complex.

Data collected includes 48 hours of baseline measurement prior to detonation. But the focus of Wittich’s research is on a 20-second span that recorded the seismic waves generated by the dynamite-powered blasts within Cather and Pound halls and the impacts made as the towers fell to the ground.

Broken down, that 20-second span includes about 8 seconds of explosives destroying columns within the two towers, a 1.5 second lull as the building loads redistribute, and slightly more than 10 seconds of the structures falling to the ground.

“One particularly interesting outcome is that the vibration, or excitation, of the actual collapse of the buildings was measured at about twice the amplitude of the blast sequence,” Wittich said. “We did expect that the vibration from the blast would be a bit smaller compared to the collapse sequence, but these are very sensitive instruments.”

Wittich is working with graduate students and colleagues to analyze the entire data set. Once the information has been parsed, it will be used to generate simulations and expand the reach of the study, with a particular focus on earthquakes.

“We don’t know when earthquake events will happen, which makes it very difficult to put up instrumentation and collect data,” Wittich said. “But this implosion has been a truly unique experience, providing us a data set that will be used to further research and understanding into structures and how they react to extreme events.”

The project has also been exciting as it is Wittich’s first faculty experimental research experience, after joining Nebraska Engineering in January 2017.

“To have a data set like this, one with the potential to make a major impact on the research community, is huge,” Wittich said. “It’s really only something that can happen at a place like the University of Nebraska, where housing officials and demolition contractors are willing to work collaboratively with faculty to complete this type of instrumentation.”