Since becoming department chair in 2011, Dawn O. Braithwaite has cultivated Nebraska’s Department of Communication Studies into an award-winning powerhouse.

During that time, department faculty have won more than 40 research, teaching and service awards at the national, regional and local levels. These include five national-level awards from the National Communication Association, the discipline’s largest and most active organization; 18 national and international divisional research awards; seven regional awards; and 10 local and campus awards.

Last year, Braithwaite even had a regional award named after her: the Dawn O. Braithwaite Award for Qualitative Research, established by the Central States Communication Association, was presented for the first time at its 2018 conference. 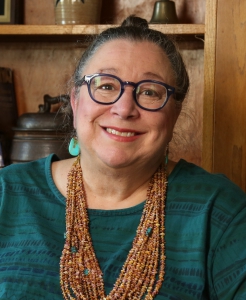 It’s an impressive track record for a department of just 12 full-time faculty members. Driving the success, colleagues say, is Braithwaite’s vigilance in staying up-to-date with available awards and their deadlines; her dedication to creating high-quality nomination packages; and, perhaps most importantly, an innate recognition that publicly acknowledging colleagues’ accomplishments is a key ingredient to building a culture of success.

“One of her greatest strengths is recognizing people for their accomplishments and understanding that the department benefits from members’ excellence,” said Jody Kellas, professor of communication studies. “She’s really cultivated this culture of celebration.”

The instinct has been there for a long time. Even back in 1998, shortly after joining the University of Nebraska-Lincoln, Braithwaite noticed that the communication department lacked a display case to show off faculty members’ books and publications. Believing it would be an important addition, Braithwaite lobbied then-department chair Bill Seiler to get one – and, understanding her goal of celebrating accomplishments, he did, despite some initial faculty caution.

She’s carried this attitude with her throughout her career at Nebraska. A few years after securing the display case, Braithwaite helped launch a department-wide newsletter containing a “congratulations” section that broadcasts good news, a tradition that’s still intact. She’s also savvy about promoting the department’s accomplishments on social media and personally congratulating university colleagues for accolades.

“Dawn has made it part of her mission to recognize people for their work in big ways and small ways,” Kellas said. “Whenever something good happens, it’s sent out in an email, it’s posted on Facebook and it’s in the newsletter. She’s the very first person to celebrate you publicly.”

But none of these accolades are about self-congratulations or bragging, Braithwaite said. It’s all aimed at boosting the department’s and institution’s reputation, and creating an environment where people know that recognition is valued, which motivates them to continue striving.

It’s also part of a broader strategy to recognize excellence at a time when grant opportunities are scarcer. Betsy Wackernagel Bach, a University of Montana professor of communication studies who’s known Braithwaite professionally for more than 30 years, said that much of her colleague’s success as a department chair stems from recognizing how crucial it is to find alternative routes for highlighting excellence.

“For some faculty in the humanities and social sciences, a lot of us don’t get big grants. That’s not how the academy is structured,” she said. “Dawn has seen that winning awards is a really good way to get your department recognized, especially in these days when funding is tight across the board.”

With years of experience serving on awards committees, in addition to her term as National Communication Association president in 2010, Braithwaite has the skills to help Nebraska faculty succeed in the nomination process. She constantly scans lists of available honors, notes their deadlines and actively matches faculty with prospective awards.

She also encourages colleagues to adopt a realistic mindset about which prizes are worth pursuing. To foster this mentality, Braithwaite encourages faculty and students to identify some of the highest honors in the field, then review the resumes of recent awardees. This helps them set achievable goals and avoid wasting time – theirs or the reviewers’.

“As a candidate or a chair supporting a nomination, you have to be judicious and strategic,” Braithwaite said. “Do your research on what you can actually win.” 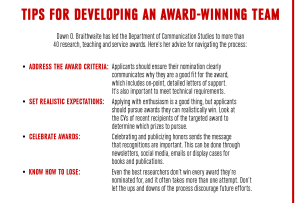 She also advises colleagues to assemble thoughtful, well-written packages that are responsive to the award’s intent. Bach, who has served on many committees that reviewed nominations of Nebraska faculty, said she’s witnessed how Braithwaite’s guidance makes a difference.

“A lot of academics dash something off at the last minute and say general things rather than specifically addressing the criteria,” she said. “With awards that Dawn spearheaded, there’s always thought put into it. The nominations stand out because the letters are so good and the application speaks directly to the criteria.”

Clearly, Braithwaite is good at winning. But this alone isn’t enough, she said – being a gracious loser is just as key. Because sometimes, no matter how strong an application, the scholar won’t win. To ensure these rejections don’t deter future applications, Braithwaite tries to normalize the ups and downs of the process.