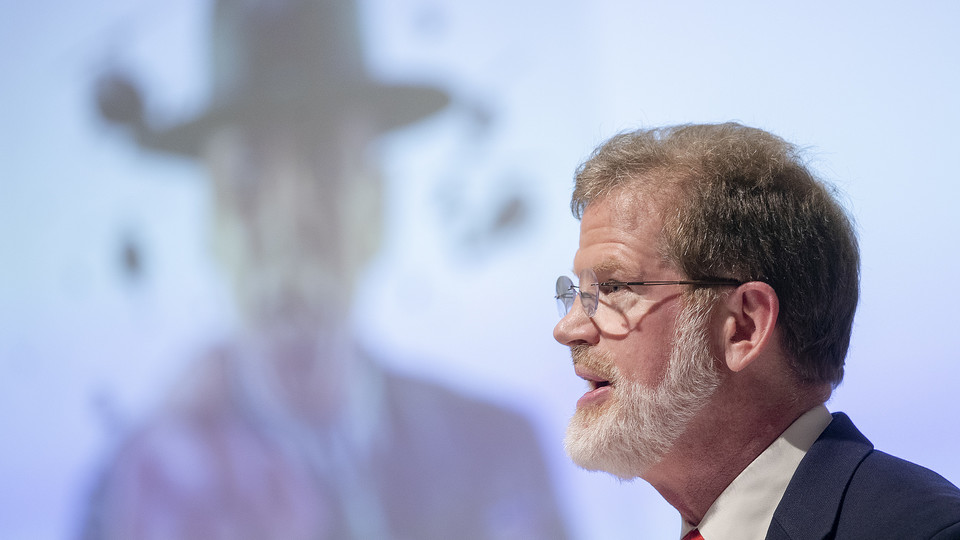 Despite the nativist and anti-immigration rhetoric that has won politically in recent years, historian Tim Borstelmann shared historical evidence of ever-growing inclusivity in the United States, during the N150 Nebraska Lecture April 25.

The lecture, which was held in the Nebraska Union Auditorium, is the fourth in the year-long series celebrating the 150th anniversary of the University of Nebraska-Lincoln.

Borstelmann, E.N. and Katharine Thompson Professor of Modern World History, took listeners on a journey through the past two centuries and demonstrated how American citizens have embraced foreigners, and become a “radically inclusive society.”

“American society operated much like an amoeba does with foreign objects. After an initial encounter, and amoeba slowly surrounds and absorbs the foreign,” Borstelmann said. “What used to be outside becomes inside. This process happened in the United States, with cuisine, the continual evolution of popular taste to absorb new ethnic traditions.”

Calling on a quote from the Stanley Kubrick-directed film, “Full Metal Jacket,” Borstelmann explained that much of the reason Americans are inclusive is American exceptionalism.

“This universalist assumption arises not merely in fiction or art,” Borstelmann said. “John Pryor, a U.S. Army sergeant serving in Iraq two decades later, explained precisely the same view to journalist George Packer, ‘In my heart, I believe everybody is American.’

“There has been an abiding assumption that American culture, American principles and American practices are not only the best ever created by human beings but are also closely aligned with the very essence of human nature. The ultimate logic of American exceptionalism on brightest display during the Cold War held that U.S. history and American institutions had facilitated the full liberation of the human spirit and the fulfillment of the highest human aspirations.”

Borstelmann’s presentation is a preview of his forthcoming book, “The Hearts of Foreigners: How Americans Understand Others,” slated to be published by the Columbia University Press in 2020.

The next Nebraska Lecture will explore “Willa Cather On Campus,” May 7 at 3:30 p.m. in the Mary Riempa Ross Media Arts Center. The talk will be delivered by Kari Ronning, research associate professor of English and co-director of the Willa Cather Journalism project.

Nebraska Lectures are regularly held twice a year, but the series was expanded to monthly talks for the university’s 150th anniversary celebration, supported by a grant from the National Endowment for the Humanities through Humanities Nebraska.

All talks are free and open to the public and are streamed online and available via podcast.