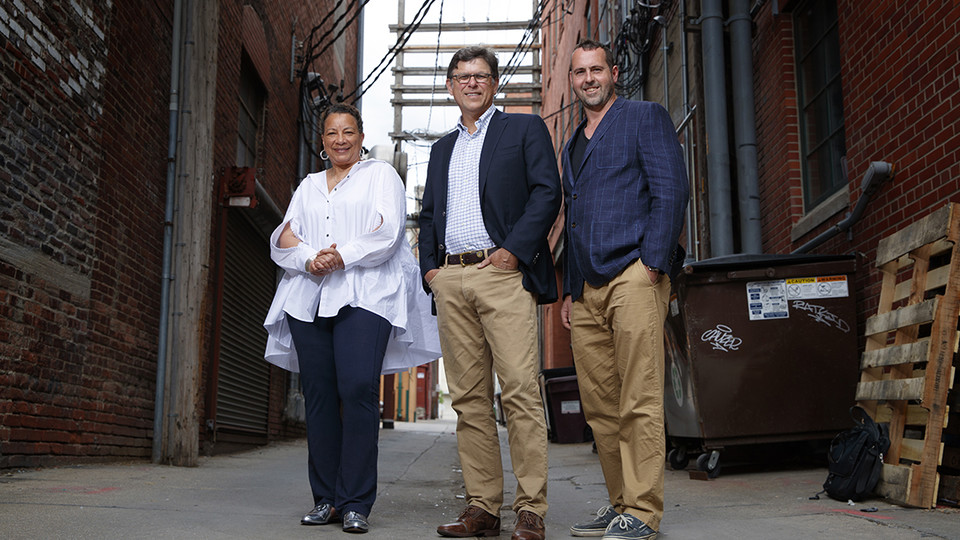 Building on the success of their short film, “Anna,” University of Nebraska–Lincoln scholars Kwakiutl Dreher, William Thomas and Michael Burton are ready to tell a more in-depth story about the fight over slavery.

The interdisciplinary team will develop “The Bell Affair: A Film Reframing American Slavery and Freedom.” In contrast to the 11-minute “Anna” short, “Bell Affair,” will be an hour-long documentary, set in 1830s Washington, D.C., at a pivotal moment in the national struggle over slavery.

“The project tells the story of Daniel Bell, who launched a lawsuit to make his family free just as a labor strike, a lynch mob and a race riot erupted in the nation’s capital in the late summer of 1835,” Thomas, professor of history and John and Catherine Angle Chair in the Humanities, said. “Bell privately negotiated for the freedom of his wife and children, but his plans were upended. In the public trials that followed, the supremacy of the law, the freedom of the press, and the fate of an innocent man hung in the balance.”

“The Bell Affair” will be the group’s second animated historical feature. It is moving forward in part due to a grant awarded by the National Endowment for the Humanities in August.

The award-winning “Anna” told the story of Ann Williams, who jumped from a third-story window to escape the fate of being sold to another slave owner and separated from her family. Combining live-action with rotoscope animation, it was a proof-of-concept project that set the stage for “Bell Affair.”

“For ‘Anna,’ I concentrated on Anna—just Anna,” Dreher said. “‘The Bell Affair’ is a feature-length production that involves a nimiety of characters. When we began our roundtable discussion for ‘The Bell Affair,’ Will and I understood that a central collaboration would have to occur. It is a smooth partnership especially since history is my minor discipline of research, so Will and I sync in our vision of the script.”

Dreher will also be directing the film. They will again collaborate with Burton, an animator and assistant professor of practice in textiles, merchandising and fashion design in the College of Education and Human Sciences.

In addition to producing, promoting and distributing the film, the team will also develop a website with companion materials and design teaching programs with original source documents.

“Our goal (with the series) is to extend the historical imagination to recover these stories, showing how ordinary people used the law to define their rights and how their actions intersected with the nation’s highest politics,” Thomas said. “The film and website will tell the complete story of the Bells for the first time, dramatize the historical complexity of their enslavement, and place their resistance to enslavement in its full context.”

They aim to distribute the film through educational partners, film festivals and broadcast channels. They also want to organize community-hosted screenings that spark conversations.

“I envision ‘The Bell Affair ‘circulating in film festivals and other socio-cultural communities,” Dreher said. “I see it being used as a tool for discovery about our past and, more specifically, generating more insights into freedom making as enacted by enslaved people.”