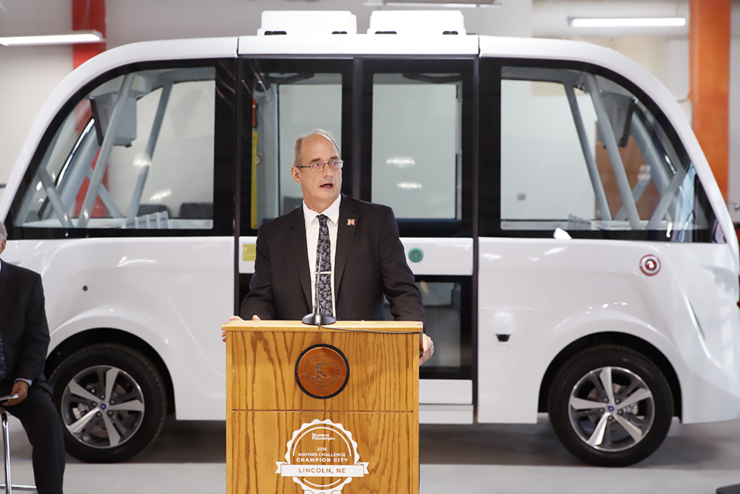 Nebraska Innovation Campus is living up to its name.

The university’s epicenter of forward-thinking initiatives will temporarily house the state’s first self-driving shuttle, which was announced June 20 at Nebraska Innovation Studio.

The City of Lincoln, which won a $100,000 grant from Bloomberg Philanthropies to test the autonomous system, plans to release a public riding schedule for the shuttle within the next two weeks. Expected to remain in Lincoln through at least mid-July, the electric-powered shuttle will be monitored by an onboard operator. It carries up to 15 passengers.

With the announcement, Nebraska becomes one of the first Big Ten institutions – and among just a few universities nationally – to feature an autonomous shuttle system.

“Nebraska Innovation Campus is proud to be part of Lincoln’s autonomous shuttle project,” said Dan Duncan, executive director of the campus. “NIC is designed to facilitate and grow partnerships between the public and private sector. Housing the shuttle at Nebraska Innovation Studio and hosting the initial test rides are great examples of public-private partnerships in action.”

Lincoln Mayor Chris Beutler encouraged members of the university and city communities to ride and provide feedback on the autonomous shuttle, which is produced by the French company Navya. Input from riders will inform the city’s application for a $1 million or even $5 million Bloomberg grant later this year. Those larger grants, given to four of the 35 cities awarded the initial $100,000, would fund the production of up to six autonomous shuttles that would traverse fixed routes through downtown Lincoln as early as 2019.

Like many of its self-driving counterparts, the Navya shuttle features a series of cameras, global positioning systems and laser-based sensors designed to orient the vehicle and detect obstacles. The 15-foot-long vehicle continuously plugs that data into algorithms that help direct its acceleration, braking and trajectory.

The university’s Public Policy Center and College of Architecture have already begun gathering opinions on the self-driving shuttle from various demographic groups, including senior citizens and regular riders of the city’s StarTran bus service.

Samantha Brannagan, a graduate student in community and regional planning, is among several students who are designing surveys, conducting focus groups and synthesizing the data they collect.

“How many people get to work on a project like this? It’s so cool, especially for a (community and regional) planning student,” Brannagan said. “You want to work with urban design and the city. The fact that it’s with the mayor’s office – the involvement of people who work with the city and really want to try new and innovative things – is really exciting.”

One of Brannagan’s professors, Daniel Piatkowski, contacted a member of the city’s public works department to offer his services after learning about the project.

“The next day, I was in a meeting to help design a survey,” said Piatkowski, assistant professor of community and regional planning. “It dovetails with some of my research into how we’re going to be transporting ourselves around in the future and what that means for aging populations – people who may not be able to drive in the foreseeable future.

“I always want to do community-engaged research that impacts the city that I live in and that I’m raising a family in. And from a national perspective, (almost) nobody else is doing this. We’re the tip of the spear.”

The university also helped advocate for the legislative approval needed to make the project possible, said Laurence Rilett, a professor of civil engineering who directs the Mid-America Transportation Center. The self-driving shuttle represents an especially novel learning opportunity for students from K-12 through graduate school, he said.

“The reality is that we’re going to have more change in our transportation system during the next 10 years than we’ve had in the past 60 years,” Rilett said. “Being on the ground floor of this is great for our students.”

A ceremonial signing of the bill that paved the way for autonomous vehicles in Nebraska will take place June 25 at Nebraska Innovation Campus. Anna Wishart, a state senator from Lincoln who introduced the bill, and Nebraska Gov. Pete Ricketts will attend the ceremony.