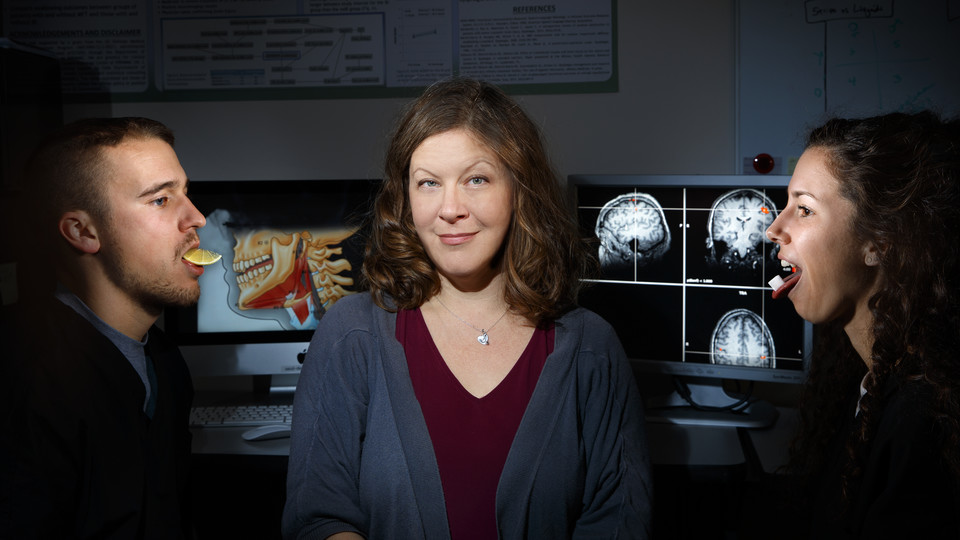 The ability to swallow is so automatic that many take it for granted. Yet approximately one in four people experiences dysphagia, or difficulty in swallowing, at some point in their life.

Among the causes are cerebral palsy, cleft palate, brain injury, stroke and Parkinson’s Disease. The disorder costs more than $4 billion per year in acute hospitalization expenses — but its true cost may come in quality of life.

“So much of what we do socially revolves around food — getting coffee with friends, celebrating birthdays with cake, gathering your family for a holiday dinner,” said Angela Dietsch, a researcher and clinical speech pathologist at the University of Nebraska–Lincoln. “Even a Super Bowl party isn’t about football.”

Dietsch, an assistant professor in Special Education and Communication Disorders, is heading up innovative new research exploring how the physical sensation of taste might be used to remap neural pathways in the brain to re-establish the ability to swallow.

Traditional therapies focus on motor aspects, essentially “strengthening” of the swallowing muscles. The approach under investigation by Dietsch and her team would incorporate the sensory experience of swallowing to help prime the neurological system to coordinate dozens of muscles involved in the motor act of swallowing.

The premise: Whether sweet, bitter or sour, a taste experienced on the tongue stimulates the brain. By identifying the areas of the brain stimulated by each taste, it may be possible to use taste to rebuild the ability to swallow.

“My work explores the use of taste stimulation as a complement to traditional therapy,” Dietsch said. “Can taste stimulation help increase the blood flow to swallowing-related parts of the brain and thus help it reorganize and recover more quickly? Are any brain changes associated with actual improvements in the swallowing movements?”

Dietsch began investigating the linkages between taste and swallowing as a postdoctoral researcher at Walter Reed National Military Medical Center in Bethesda, Maryland. Although that line of research was discontinued at Walter Reed, Dietsch’s background in neuroimaging allowed her to press forward when she started her own laboratory at the University of Nebraska-Lincoln.

With funding support from the university, Dietsch’s team has completed preliminary work that used a combination of X-rays and magnetic resonance imaging to identify how tastes influence brain activity among normal swallowers. The team has developed a novel way to deliver taste sensation that is safe for people with dysphagia. Using neuroimaging, researchers established which taste stimuli are associated with the brain blood flow changes that are predicted to help with neurorecovery, and confirmed those same stimuli are associated with better swallowing mechanics in healthy people and in those with dysphagia. The next step is landing a major grant for a randomized clinical trial.

“This is a line of research that no one else is pursuing at this point,” Dietsch said. “There are a few others that have dabbled in work relating to taste stimulus and swallowing, but none that are using both sets of measures with the customized stimuli that we are. We have had to do a lot of groundwork to establish our methodology and have it peer reviewed and published.”

In one surprising discovery, the researchers identified fundamental differences in swallowing movements based on genetic taster status – an inherited sensitivity to taste. Those findings might be useful to researchers who are investigating obesity, exercise, weight loss and bone density, but they can also help Dietsch and her team answer whether some people are more prone to dysphagia and whether some are more likely to benefit from treatment.

“This is an issue that affects not just the people who have dysphagia, but also all the family and friends who are not able to have Thanksgiving dinner or a cup of coffee with them,” she said. “There have to be better solutions for individuals with swallowing problems. Hopefully, we’ll break through if we keep doing good science.”