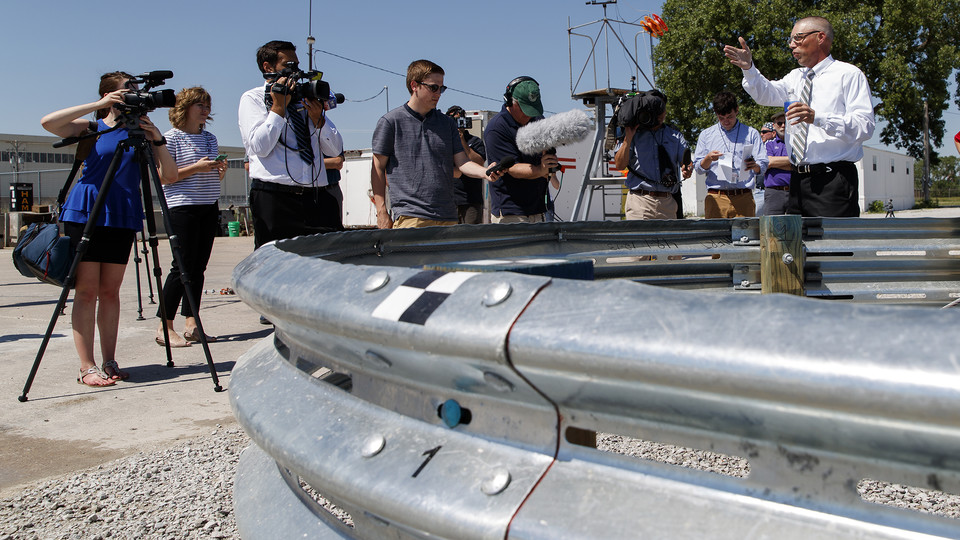 Ongoing research into a Nebraska-developed barrier that is protecting race-car drivers nationwide drew NASCAR’s Michael Annett to the University of Nebraska–Lincoln on June 5.

During the past 20 years, the university’s Midwest Roadside Safety Facility has become widely known for developing the energy-absorbing Steel and Foam Energy Reduction — or SAFER — walls that are used at all high-speed NASCAR and IndyCar tracks across the country.

“Drivers have been for a long time the greatest advocates of safety in motor sports, and it’s good that they will be given a chance to understand what this technology can do and does for them,” said Ronald Faller, director of the Midwest Roadside Safety Facility and a research professor in civil engineering. “From the beginning, it was IndyCar and NASCAR that have been our partners in making the tracks safer, and the drivers have been engaged, too.”

Annett, a native of Des Moines, Iowa, is among drivers who will race June 17 in the NASCAR Xfinity Series Iowa 250 race at the Iowa Speedway in Newton, Iowa. The Iowa Speedway is the only major track in the United States that uses SAFER barriers as its sole retaining wall.

Annett’s visit included an overview of SAFER barrier research and development, a tour of the Speedway Motors Museum of American Speed and witnessing a full-scale crash test at the Midwest Roadside Safety Facility outdoor proving grounds on the western edge of the Lincoln Municipal Airport.

The road to developing the SAFER barrier began when open-wheel racing mogul Tony George and his Indy Racing League — now known as IndyCar — were struggling to come up with a “soft” wall that could protect drivers in high-speed crashes.

The PEDS (Polyethylene Energy Dissipating System) that had been installed at Indianapolis Motor Speedway was not working as seamlessly as they had hoped. In fall 1998, the Indy Racing League turned to MwRSF for help.

Over the course of nearly four years, engineers and researchers at Nebraska teamed up with motor sports experts to design multiple iterations of the wall and to conduct a large number of high-speed crash tests before the SAFER system was ready to go.

The SAFER system is designed with stacked square steel tubes that are welded together to form a 40-inch-high barrier. Bundles of closed-cell polystyrene foam, designed to absorb and redistribute the kinetic energy created when a vehicle contacts the wall, are inserted between the tubes and the track’s original outer concrete retaining wall.

Since 2002, the SAFER system has been installed at nearly every major oval track in the U.S. and at major ovals in Canada, Brazil and Japan, along with select locations on road courses throughout the world.

Though the SAFER barrier has been in the spotlight for many years, the Nebraska facility is known for many other highway safety innovations.

“It’s very important, but it’s not been our main focus, which is and has always been highway safety,” said Robert Bielenberg, research engineer. “The SAFER barrier is a big branch that grew out of that.”

Technology created in the SAFER development has been used to inform other research, and the development of many other barriers and devices as Midwest Roadside Safety Facility-developed roadside safety systems have been implemented in all 50 states.

Among those innovations are the Midwest Guardrail System, a 31-inch guardrail system that is considered the standard barrier used along American highways, and the RESTORE barrier that reduces the impact of truck crashes.

The National Safety Council estimates that 40,100 people died in the U.S. in 2017 as a result of motor vehicle crashes. Faller said there are highway safety innovations he is interested in pursuing, including virtual systems that have little-to-no physical presence.

“Maybe we can develop a system that can keep those cars on the road and save lives,” Faller said. “My dream, and our duty, is to make that happen.”

Hames fears how COVID-19 pandemic will affect the Amazon region