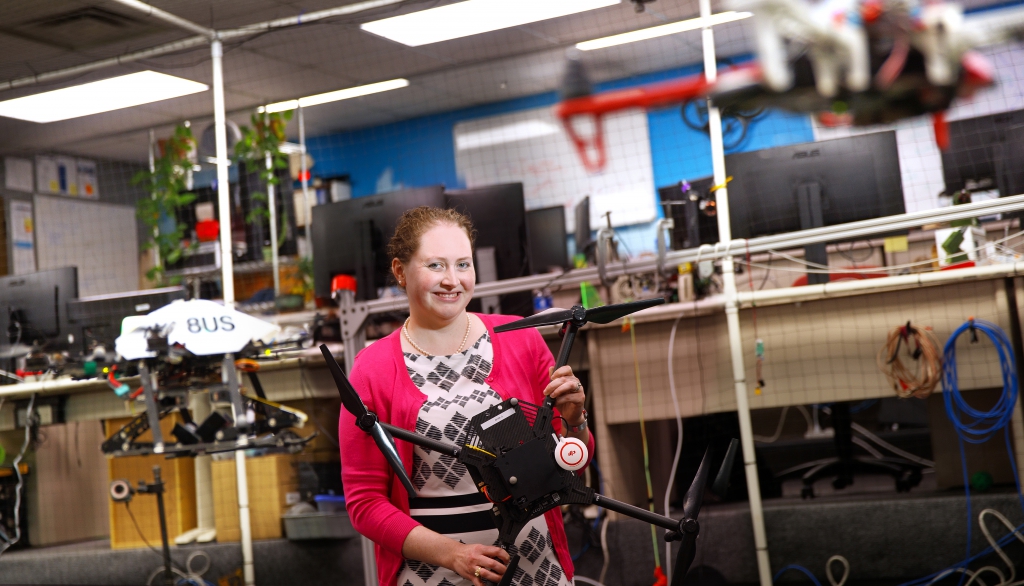 Every day, drone sightings are becoming more common — buzzing around the local park or hovering above the kids’ soccer game. But many people are apprehensive around drones, citing privacy and safety concerns.

University of Nebraska–Lincoln computer scientist Brittany Duncan wants to ease people’s discomfort by enabling drones to communicate with the humans around them. Communication could also make drones valuable coworkers in numerous settings, such as warehouses, agricultural fields or even nursing homes.

Duncan, assistant professor of computer science and engineering, earned a nearly $550,000 Faculty Early Career Development Program award from the National Science Foundation to develop software that allows drones to communicate through movement, such as bobbing up and down, and to maintain comfortable distances from people.

“As we look toward the future and new uses for drones, they’re going to need to be able to intelligently interact with people who aren’t controlling them,” Duncan said.

First, she and her team will conduct surveys to understand what people want drones to communicate — perhaps, for example, when the drone is in photo-taking mode. Next, they’ll identify drone movements that people intuitively understand. For example, Duncan’s previous work found most people understand that a drone circling in a tightening downward spiral indicates that it’s landing.

For other tasks, researchers will ask people unfamiliar with drones to identify or create movements they believe communicate those tasks. The team will search for commonalities, and then develop software that allows drones to make those movements. They’ll use videos posted online to test people’s ability to understand what the movements communicate.

Duncan is concentrating on movement as opposed to speech because, unlike speech capabilities, movement doesn’t require additional hardware, thereby limiting weight and extending battery life. Additionally, many settings, such as crowds or warehouses, may be too loud to hear a drone. In quiet environments, speech might be disruptive.

Another component to reducing anxiety around drones is preventing them from coming uncomfortably close to people. Most drones operate using GPS, which isn’t exact. Early studies indicate people’s proximity comfort level falls within a GPS margin of error, which would allow drones to come too close.

Duncan’s team will identify people’s comfort levels under different conditions, such as enclosed or open spaces and with varying drone sizes. With those parameters defined, she’ll create software that prevents drones from flying too close to people.

The software packages could be made available to general drone operators. Such software is already available to prevent drones from flying near airports, a federal restriction.

“The idea is that this could be the next optional software,” Duncan said of her research. “It tells people the things they should be concerned about with drones and makes you a more conscientious drone operator.”

She also envisions drones providing useful services through the ability to communicate through movement. In warehouses, for example, drones could locate inventory and lead forklift operators to the correct spot, perhaps bouncing up and down to indicate a found item. The drone could then maneuver people clear of a reversing forklift to avoid accidents.

In a nursing home, drones could unobtrusively make night rounds, alerting staff to problems, such as a distressed resident or a gas leak. During the day, drones could direct family members to the correct room, freeing staff for other duties.

In agricultural or orchard fields, drones could survey crop conditions and direct operators or field workers to potential problems.

Duncan’s award also allows her to educate the public about drones. She’ll host a six-week class on robotics and human-robot interaction with the university’s Osher Lifelong Learning Institute. She’ll also work with University of Nebraska State Museum staff to teach middle school students about robotics and how to conduct robotic experiments. The students will use those skills to teach even younger students.

The NSF grant, known as a CAREER award, supports pre-tenure faculty who exemplify the role of teacher-scholars through outstanding research, excellent education and the integration of education and research.