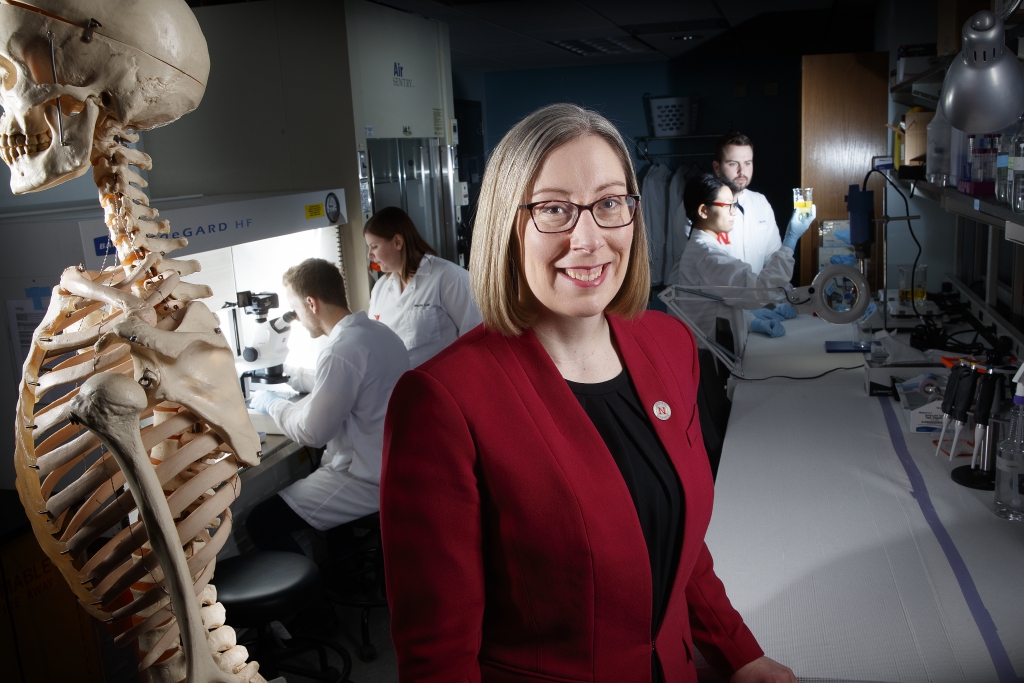 Opioid addiction often begins innocently enough, with a doctor’s prescription for chronic pain. One of the most common culprits is low back pain, which affects 80 percent of Americans during their lifetimes. Of the roughly 30 percent of these patients who are prescribed opioids, studies show that eight to 12 percent become addicted – making low back pain a key player in the nation’s opioid crisis.

To combat this trend, University of Nebraska-Lincoln biomedical engineer Rebecca Wachs is using a five-year, $510,400 award from the National Science Foundation’s Faculty Early Career Development Program to develop a targeted, biomaterials-based treatment for low back pain. Rather than simply masking pain with a pill that passes through the bloodstream, as is the strategy with opioids, Wachs’ approach tackles the pain at its source, focusing on the lower back’s nerves and spinal discs that trigger discomfort.

“The whole premise is that this approach is local at the source of the pain,” said Wachs, assistant professor of biological systems engineering. “Our treatment essentially displaces the use of opioids. Theoretically, it should modulate pain locally and not require prescriptions at all.”

Wachs said that low back pain is often caused by the sprouting of painful sensory nerve fibers deep into spinal discs, which typically house nerves only in their outermost region. Aggravated by an accumulation of inflammatory factors and free radicals within the disc, the fibers are repeatedly stimulated, which can result in chronic pain.

Her solution is two-pronged. First, she’s identifying and testing drugs and proteins that cause the painful nerve fibers to die back and retreat from the disc, cutting off the pain’s source. Second, she’s developing biomaterials aimed at blocking the regrowth of nerves into the disc, preventing the pain’s return. Her team is the nation’s first to use this two-step approach – dieback followed by regrowth prevention – for musculoskeletal pain relief.

In the first step, Wachs is targeting two materials that are believed to cause dieback of nerve fibers in the spinal cord. She’s running tests to determine the ideal concentrations to cause dieback, and to ensure the treatments don’t impair the disc’s overall cell health. For the second step, she’s engineering materials known to prevent nerve growth after spinal injury, repackaging them for use in the disc.

Wachs will test the biomaterials from both phases in a model system, allowing her to gauge their effectiveness. The long-term goal is to combine all the substances into a single, conservative treatment – such as an ultrasound-guided injection or other form of noninvasive surgery, Wachs said.

The work is paradigm-shifting in its focus. Though the majority of low back pain research targets disc degeneration as the primary cause, Wachs said a large percentage of people experience painless disc degeneration. This suggests that other factors drive the discomfort, and that researchers may need to shift their focus.

“Our approach is novel because we’re focused on pain independent of degeneration,” she said.

Wachs’ education initiatives connect Husker rehabilitation engineering students with members of Nebraska’s Osher Lifelong Learning Institute, or OLLI, a learning program for adults 50 and older. To sharpen students’ science communication skills, and to expose OLLI members to cutting-edge engineering topics, Wachs’ undergraduates will conclude the semester by presenting a TED talk to a volunteer OLLI panel. The students will also interact with a career panel of OLLI members who have experience in the health and engineering fields.

Additionally, Wachs is developing two full-length OLLI courses focused on topics like osteoarthritis, low back pain and alternative therapies to total joint replacements and fusion. She’s building on the success of a preliminary OLLI course she taught last year, attended by more than 75 lifelong learners.

NSF’s prestigious CAREER award supports pre-tenure faculty who exemplify the role of teacher-scholars through outstanding research, excellent education and the integration of education and research.