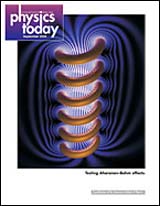 The Aharonov–Bohm Effects: Variations on a Subtle Theme

On the Cover: The notion, introduced 50 years ago, that electrons could be affected by electromagnetic potentials without coming in contact with actual force fields was received with a skepticism that has spawned a flourishing of experimental tests and expansions of the original idea.

Herman Batelaan is professor of physics and astronomy.