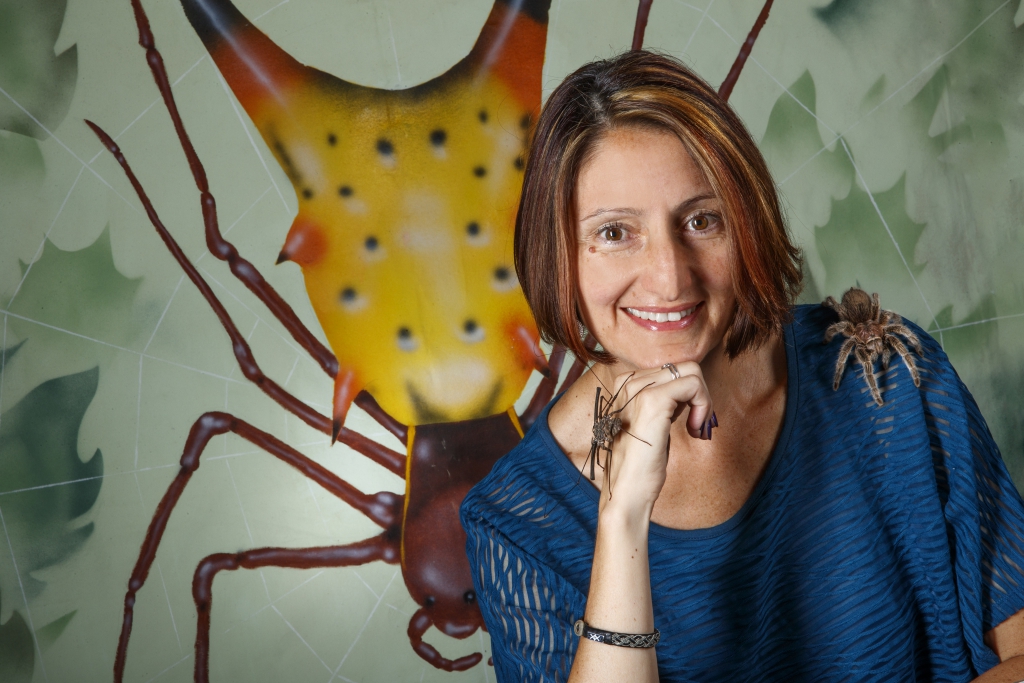 For many people, the sight of a spider is enough to cause a surge of fear, an impulse to run away or, for true arachnophobes, extreme reactions like heart palpitations and fainting.

But to Nebraska biologist Eileen Hebets, eight-legged creatures are the stuff not of nightmares but of “D.R.E.A.M.S.” – discovery, research, engagement, adventure, memories and success. During her Nov. 7 Nebraska Lecture, “Using Arachnids to Inspire D.R.E.A.M.S.,” she’ll discuss her groundbreaking discoveries, her passion for informal science education and the curiosity and persistence underlying her research. The free, public lecture is 3:30 p.m. in the Nebraska Union auditorium, 1400 R St., with a reception following.

“Arachnids are something that everyone can relate to,” said Hebets, professor of biological sciences. “All Nebraskans will go home from the lecture having learned about something that lives in their backyard.”

Hebets is at the forefront of arachnid and animal behavior research, having uncovered the science behind several previously unexplained phenomena. She’ll address some of her highest-profile discoveries, including cannibalism’s role in the mating ritual of dark fishing spiders; the reasons that amblypygids, arachnids from the Florida Keys, have such a sharp sense of smell; and how exactly these amblypygids are able to breathe underwater.

It’s not luck that led to these breakthroughs, Hebets said. What gives her the edge is a curiosity to figure out “why” and a willingness to engage in the sometimes tedious day-to-day work that undergirds any major discovery. She’ll tell attendees about some of the not-so-glamorous parts of her work, hoping to inspire people – scientists or not – to keep pushing forward.

While studying nocturnal amblypygids in Costa Rica, for example, she ventured out nightly on her own. On one outing, she was struck at by one of the most dangerous snakes in the Western Hemisphere, the fer-de-lance viper, whose bite can be fatal. The incident spurred one of many moments of doubt.

“A lot of times I was out there by myself, and I thought, ‘Why am I doing this?’” Hebets said. “I really had to push myself to get the data I needed to answer my questions.”

Hebets is also a pioneer of informal science education, capitalizing on spiders’ natural charisma to help students of all ages engage and persist in science. As part of her National Science Foundation-funded Eight-Legged Encounters project, Hebets has developed a variety of hands-on activities intended to bridge the gap between academia and the public. During the lecture, she hopes to demonstrate some of these tools interactively with audience members.

She’s driven by a desire to help students use their innate creativity and inquisitiveness to learn in a fun and engaging way. This is a good approach for the greater public, too, Hebets said.

“Nature provides uncapped opportunities for discovery,” she said. “If we can find time to get out and go for a walk, and walk slowly and observe, there are amazing things all around us that we are typically not aware of and don’t appreciate. This goes for anyone – the world offers an incredible chance to learn.”

Hebets, who joined the university in 2005, has appeared in more than 100 publications and has three active grants totaling around $1 million. She’s heavily involved in outreach, having developed youth summer camps that have impacted hundreds of Nebraska students in the last decade, as well as the university’s Community Science Through Outreach course, in which Husker students create interactive programs for after-school science clubs. In 2017, she received the University of Nebraska’s Innovation, Development and Engagement Award, the system’s most prestigious award for using academic expertise to enrich the broader community.

Her lecture is part of The Nebraska Lectures: Chancellor’s Distinguished Lecture Series, sponsored by the university’s Research Council, Office of the Chancellor and Office of Research and Economic Development, in partnership with the Osher Lifelong Learning Institute.