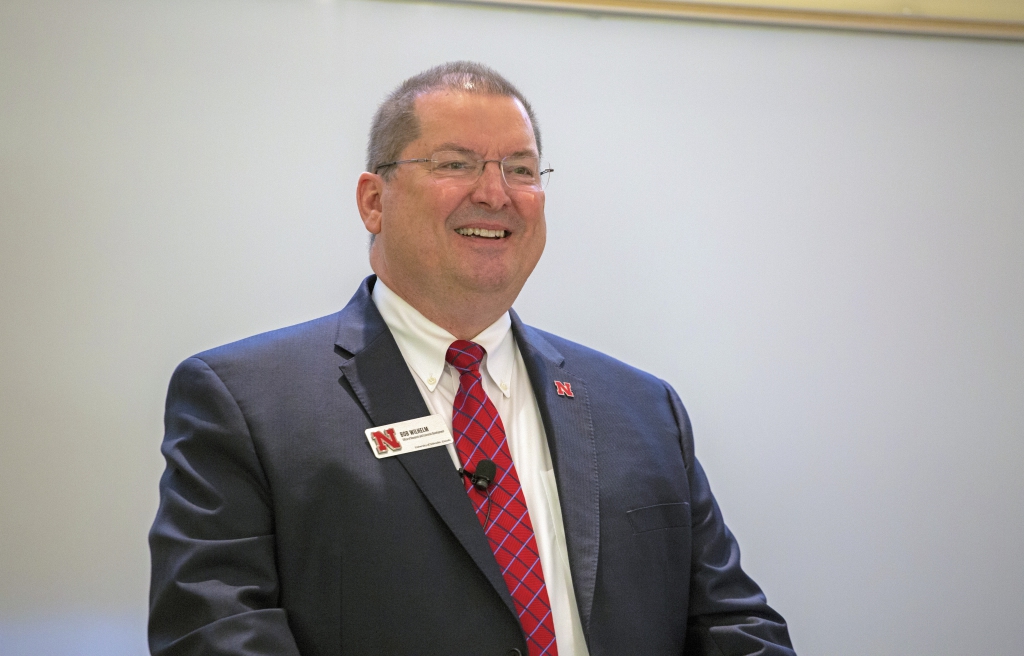 Robert “Bob” Wilhelm began his tenure May 15 as vice chancellor for research and economic development at the University of Nebraska-Lincoln. Wilhelm, who held the same post at the University of North Carolina at Charlotte before coming to the Cornhusker State, is charged with establishing research directions, cultivating partnerships, strengthening national and international relationships, and articulating a vision for partnership-based research and economic development. He talked to the Office of Research and Economic Development about plans and strategies for his new role, his hobbies outside of work and his impressions of Nebraska.

ORED: You were at UNC Charlotte since 1993. What was it about the university that piqued your interest in pursuing this position?

Wilhelm: I was attracted to both the scale of the research activity here and the fact that this is the flagship, land-grant university for the state. As I visited, I saw that the Lincoln campus is the predominant campus for the state, integral to the economy and located in the state capital. I’ve had a lot of experience connecting universities to research partners and to the greater community, and now I can test these approaches on a larger scale.

It was also interesting to see that many of the leaders at Nebraska are relatively new. As I got to know them, I felt it was a team I could work with quite well.

ORED: What are your first orders of business as vice chancellor for research and economic development?

Wilhelm: I’m looking forward to meeting the UNL faculty and learning about their talents, goals and aspirations. I’ve also enjoyed being part of the Nebraska Commission of 150. It’s an honor and privilege to think about the future for the state’s research university.

I’m beginning to learn about all the different people and organizations at the university and around Nebraska, which will help me connect people and make decisions in this community. I’m looking at structural and organizational things that might need attention, like facilities and administrative cost allocation or the management of centers and institutes. I’m also working to articulate the research mission so I can champion the university’s efforts.

I’m paying a lot of attention to research development. There’s been significant growth in this area at Nebraska, but we all have expectations that more can be done. I’m focused on “more, sooner.” Every time you let up, you need to catch up. I’m going to work with ORED, the associate deans for research, center directors and faculty to continue to accelerate Nebraska research.

I’m learning about economic development vehicles here, including Nebraska Innovation Campus, NUtech Ventures, Industry Relations and other startup and innovation activity. I have a lot of experience in these areas, and I need to better understand the model here.

ORED: What do you see as Nebraska’s greatest strengths that can be exploited to grow the research and economic development enterprise?

Wilhelm: I think it’s a little bit early for me to answer. Certainly, people in the state would say our agricultural expertise is something to build on. Some of the centers, like the Water for Food Global Institute and the Nebraska Center for Research on Children, Youth, Families and Schools, are doing a great job drawing together faculty from across the disciplines. I think that’s something to build upon.

I know there is already collaboration with the University of Nebraska Medical Center, and more can be done there. I want to work with Bob Hinson to make the National Strategic Research Institute an even bigger opportunity for the university. I’m also very optimistic about growth at Nebraska Innovation Campus.

ORED: What are some “hidden gems” of Nebraska research that hold great potential for the future?

Wilhelm: There are so many “gems” across the university, from the basic sciences to digital humanities; the list is too long to recount. I also think there is significant potential in the engineering disciplines, with so many faculty recruited recently. There are lots of opportunities for researchers to work both within their individual disciplines and in collaboration across campus, the country and the world.

ORED: What do you see as the most significant challenges the university faces in terms of research and economic development?

Wilhelm: Recruiting and keeping the best talent, particularly graduate students. It’s challenging to have a large population of research graduate students here, as it is at any university. If you look at the numbers across the country, there are fewer full-time graduate students these days, both for domestic and international students.

As we work to double our research expenditures, as the chancellor has suggested, we’re going to need a lot more people, including graduate students. Nebraska can do a better job of offering competitive compensation to graduate students. In addition, when I talk to students, it’s clear they want opportunities to work on projects that have real impact. That ought to be easy at this university, and it’s an important part of recruiting and keeping graduate students.

ORED: You played a leading role in initiating and scaling up the Charlotte Research Institute at UNC Charlotte, which has many parallels to Nebraska Innovation Campus. What lessons did you learn that can be applied to our efforts to grow NIC?

Wilhelm: Like NIC, the Charlotte Research Institute is an organization that’s front and center for connecting university research to companies and making the campus accessible to companies. I learned that facilitating public-private relationships is a long-term play. There’s a lot of blocking and tackling that needs to be done every day, and you have to be ready to work on it year after year.

We also need to focus on engaging companies in a way that facilitates their participation. Companies have different priorities than universities, and we need to come to grips with that if we want them to participate in a significant way. Some of that is in play at Nebraska, and we can make it work even better. Companies want things to happen relatively quickly, whereas universities conceptualize work across long stretches of time. Companies want to control intellectual property or confidentiality in certain ways. And they want to tap into the university’s power through a few personal relationships. These are easy things to work on, and they don’t collide with the university’s goals.

ORED: While interviewing for this position, you talked about wanting to make Lincoln not just a “talent source” that produces college graduates, but a “talent location” where graduates stay to work with cutting-edge companies and university researchers. What steps need to be taken to make this a reality?

Wilhelm: We need to invest for the long term, because a key aspect of this type of growth is encouraging companies to develop here. Building a talent concentration comes from graduates staying in the state, and they’ll only want to stay if there are both interesting opportunities and multiple opportunities. Graduates take jobs in places like Austin, Boston or San Jose, for example, with the knowledge that if one opportunity doesn’t work out, or if they want to try something different, there are many other opportunities in the same city. That’s the type of environment we need to build here.

These opportunities could come from larger-scale companies, though it’s more likely that Lincoln will succeed through new companies that are either based on intellectual property and creative activity from the university, or that want to locate in Lincoln because of the prominent expertise here. For example, we have many different branches of study focused on the microbiome – roots, soil, and animal and human health are some. These different angles and facets might attract a variety of companies.

There are growth opportunities outside of private companies, such as federal laboratories and operation centers. There also might be things brewing in Omaha that could expand into Lincoln.

ORED: What do you like to do outside of work?

Wilhelm: I like to travel with my wife, Lynda, around the country and the world. One of my daughters lives on the West Coast, the other on the East Coast, so we like to visit them. I’m a big reader. I just finished a compilation of letters from Freeman Dyson, a theoretical physicist and mathematician. The letters focus on the science and policy of the nuclear age and other aspects of modern physics. I also really like Wendell Berry, a novelist from Kentucky who has been a farmer all his life and a proponent of sustainability.

I swim every morning, and I like to play golf. When I have a chance, I like to go on long wilderness trips. I spent time in Alaska and Wyoming on recent trips. I don’t cook as much anymore, mostly because I don’t have many people to cook for, though I am very accomplished. And if I ever have any time again, I would return to computer programming, which I used to be very good at. I don’t have the time to invest in that now, and it would drive my wife crazy!

ORED: So far, what has surprised you the most about Lincoln and/or Nebraska?

Wilhelm: One thing about the state I didn’t appreciate is how many types of topography and geography it has. I’ve lived in Wichita, which is very flat. I imagined Nebraska to be like that, but I’ve come to understand there are many different varieties. I’ve been really taken by all of the people at the university that come from the many towns in Nebraska. Also, I didn’t know that Lincoln was such a site for refugee resettlement. I feel at home here and think I will have a lot of fun living in Lincoln.