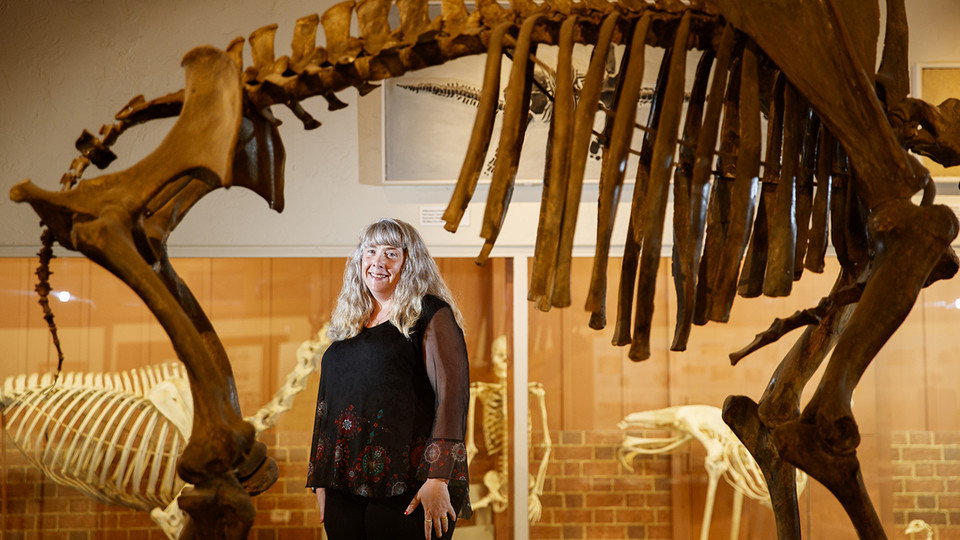 Published Sept. 20 in the journal Science, the study analyzed distributions of mammal fossils across North America following the last ice age, after the retreat of massive glaciers that had encroached south to the modern-day United States. The aftermath saw the disappearance of many famously large mammal species: mammoths, mastodons, saber-toothed cats, dire wolves and ground sloths, among others.

Surviving mammal species often responded by distancing themselves from their neighbors, the study found, potentially reducing how often they interacted as predators and prey, territorial competitors or scavengers.

The ecological repercussions of the extinctions are likely still echoing today and could preview the effects of future extinctions, said study co-author Kate Lyons.

“For 300 million years, the (cohabitation) pattern of plants and animals looked one way — and then it changed in the last 10,000 years,” said Lyons, assistant professor of biological sciences at Nebraska. “This paper addresses how that happened in mammal communities.

“If connectedness among species makes ecosystems more stable, what this suggests is that we’ve already lost a lot of those links. What this potentially tells us is that modern ecosystems are probably more vulnerable than we think they are.”

Led by Macquarie’s Anikó Tóth, the team analyzed records of 93 mammal species at hundreds of fossil sites during three timespans: 21,000 to 11,700 years ago, when the extinctions began; 11,700 to 2,000 years ago; and 2,000 years ago to the present. The researchers then assessed whether, and to what extent, a given species lived among each of the other 92 at those sites.

That data allowed the team to calculate how often a random pair of species would be expected to cohabit a site, providing a baseline for whether each pair overlapped more or less often than predicted by chance — aggregating vs. segregating, respectively. The proportion of aggregating pairs generally declined following the extinctions, and the strength of associations often dropped even among species that continued to aggregate, the researchers found.

“The loss of the giant carnivores and herbivores changed how small mammals such as deer, coyotes and raccoons interacted,” Tóth said. “Our work suggests that these changes were triggered by the ecological upheaval of the extinctions.”

Tóth, Lyons and their 17 co-authors effectively ruled out climate change and geography as drivers of the growing division. Surprisingly, the team also concluded that surviving species began cohabiting less frequently even as they expanded into larger swaths of their respective geographic ranges.

Lyons said the specific reasons for the seeming paradox and the overall trends are unclear, though the ecological consequences of losing species such as the mammoth could explain them. Mammoths toppled trees, compacted soil and, by eating and excreting masses of vegetation, transported nutrients around ecosystems, Lyons said. Those behaviors helped sustain the so-called mammoth steppe, an ecosystem type that once covered vast areas of the Northern Hemisphere. The loss of the mammoth effectively doomed the mammoth steppe, possibly compartmentalizing the expanses of land that hosted many species.

“If you’re an open-habitat species that used to occupy the mammoth steppe, and now the mammoth steppe has gone away, you might inhabit, say, open grassland areas that are surrounded by forests,” Lyons said. “But that meadow is much smaller. Instead of supporting 10 species, it now might support five. And if those patches of open habitat are spread farther apart, you might expand your geographic range and potentially your climate range, but you would co-occur with fewer species.”

Also uncertain: why common species became more common, and some rare species became even rarer, following the extinctions. Continuing to study the dynamics underlying such trends could help sharpen perspectives on current ecosystems and their possible fates, the researchers said.

“We had a complement of large mammals in North America that was probably more diverse than what we see in Africa today,” Lyons said. “Additional extinctions could have a cascading effect and huge implications for the mammal communities that we have left.”

Tóth, Lyons and their co-authors represent 18 institutions from Australia, the United States, Chile, Portugal, Finland, Canada and Denmark. All are members of the Evolution of Terrestrial Ecosystems Program at the Smithsonian Institution, which funded the team’s research.