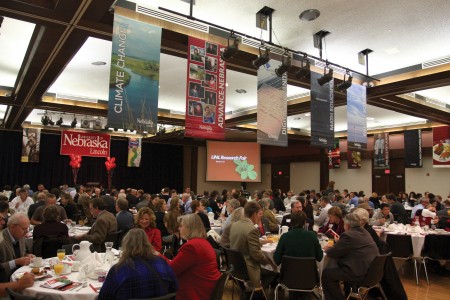 A burgeoning partnership between UNL research and athletics promises to expand understanding of the brain and concussions, enhance health and performance research and create a national model for such collaborations. Nebraska Athletics and the Office of Research and Economic Development partnered to incorporate research space into the East Stadium expansion of Memorial Stadium. Slated for completion in 2013, the expansion includes space for the proposed Center for Brain, Biology and Behavior, which will use cutting-edge imaging technology to better understand the biological underpinnings of behavior and performance, and the Nebraska Athletic Performance Lab, which will focus on research to improve performance and health. More than 100 people discussed opportunities for research collaborations during a 2012 retreat for faculty, athletics staff and private partners. The partnership provides “a bridge between athletics and academics,” said Nebraska Athletics Director Tom Osborne. “This will be a unique facility not duplicated anywhere else.”